Serial production of the Oldsmobile Silhouette minivan, as well as its twins, the Pontiac Trans Sport and Chevrolet Lumina APV models, started in the United States in 1989.

The car received a spectacular and original design, as well as an unusual body structure for such cars with a spatial steel frame and plastic outer panels. The minivan had seven seats, and a sliding door on the starboard side was used to access the passenger compartment.

The Oldsmobile Silhouette was positioned as a more expensive and “luxury” car compared to its counterparts under the Chevrolet and Pontiac brands, so the equipment of the car was very rich for those years. In the standard configuration or in the list of options, one could find a driver’s airbag, ABS, radio control buttons on the steering wheel, a built-in child seat, and an electric sliding door.

Production of the second generation of the Oldsmobile Silhouette minivan started in 1996. Model analogues were Pontiac Trans Sport, Chevrolet Venture and Opel Sintra.

The car had a new platform, a traditional monocoque design and an inconspicuous conservative design. The car was produced in versions with a short and long base, and the sliding side door was now not only on the left, but also on the right. For a surcharge, buyers were offered a VCR with a screen for rear passengers.

The car was equipped with only one power unit – a V6 3.4 gasoline engine with a capacity of 188 hp. With. and a four-speed automatic.

The last Oldsmobile Silhouette rolled off the production line in Georgia in March 2004. And soon after that, the Oldsmobile brand itself ceased to exist. 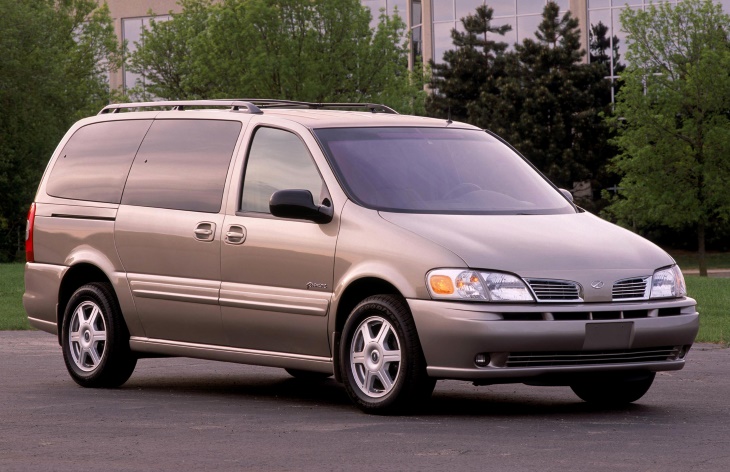