The Pontiac Aztek was a so-called crossover SUV offered by the American automobile manufacturer General Motors under the Pontiac automobile brand from 2001 to 2005.

The Pontiac Aztek was based on the 1999 design study of the same name.

The production version was introduced in model year 2001 and caused a stir with its unusual design. It was produced together with the Buick Rendezvous, which was also built on the shortened GM U platform, at the General Motors plant in Ramos Arizpe (Mexico).

There was a choice of a base Aztek and the Aztek GT, both available with a choice of front-wheel drive or all-wheel drive; the all-wheel drive model had independent rear suspension, the base model had a live axle. The Aztek was powered by a 3.4 liter V6 petrol engine, which transmitted its power via an electronically controlled four-speed automatic.

For model year 2002, the plastic panels on the body were no longer ribbed, but smooth and painted in body color, the front indicators were given clear glass covers and the glass tailgate was given an attached tear-off edge (spoiler).

From 2004, a CD/MP3 player was available for a surcharge. 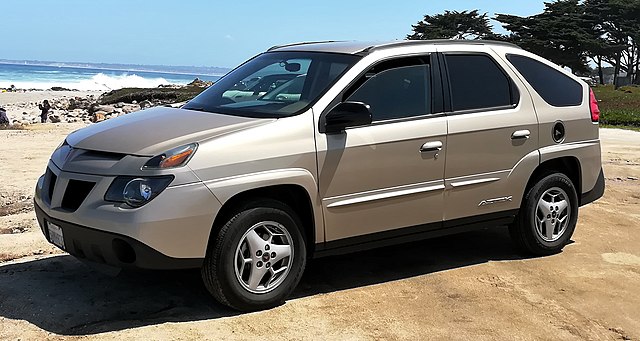