In 1989, the Pontiac Trans Sport minivan debuted on the American market. The car stood out from the general range of cars of those years with its truly unusual and completely recognizable design: a swift silhouette, “divided” glazing into two parts, a hood without a radiator grille, rear lights on the roof pillars. The design was also non-standard – the Pontiac Trans Sport had a spatial steel frame with plastic outer body panels. The minivan had seven seats, and a sliding door on the starboard side was used to access the passenger compartment.

Completely similar cars, differing only in design details, were also produced under the names Oldsmobile Silhouette and Chevrolet Lumina APV.

The Pontiac Trans Sport went on sale with one powertrain option, a 3.1-liter V6 engine with 120 horsepower. With. and a three-speed automatic transmission. The drive was front. In 1991, a version with a V6 3.8 engine (170 hp) appeared in the range, which could be equipped with both a three-speed and a four-speed “automatic”. In the European market, the car was offered with a 2.3 four-cylinder engine that developed 146 hp. with., and a five-speed “mechanics”.

Despite the public attention that the Pontiac Trans Sport attracted, sales were lower than expected. According to the General Motors concern, the reason for this was the overly extravagant appearance of the car, so in 1994 the model was restyled, making it look a little more traditional.

In 1995, a 1.9-liter turbodiesel (90 hp) was offered to European buyers, “borrowed” from PSA Peugeot-Citroen. At the same time, both six-cylinder gasoline engines were replaced by a new “six” with a volume of 3.4 liters and a power of 180 hp. with., working in tandem with a four-speed “automatic”.

The “second” Pontiac Trans Sport, which began production at the US plant in 1997, was in all respects a more traditional car with a calm, unimpressive design and a steel monocoque body. Model analogues were minivans Chevrolet Venture, Oldsmobile Silhouette and Opel Sintra.

The car was offered only on the American market and with only one powertrain option – a 3.4-liter V6 engine with a capacity of 180-185 hp. With. and a four-speed automatic. Buyers could choose a version with one or two sliding side doors. 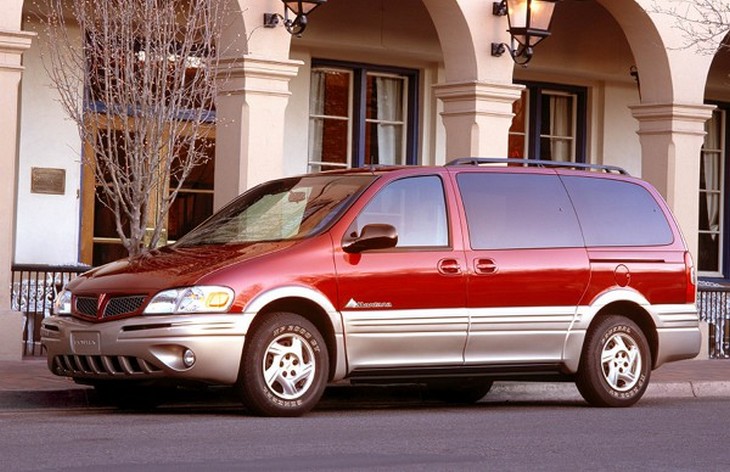