As you know, modern and safe cars developed by the General Motors concern are produced under the Chevrolet brand. It is Chevrolet that enjoys the greatest success among the divisions of the huge American corporation. This is no coincidence, because all these models are the result of the thoughtful and painstaking work of a whole team of specialists – designers, engineers and auto mechanics. Safe and comfortable cars, designed for active operation in urban conditions, appeal to even the most demanding car owners. In addition, they are beautiful in appearance, especially the models of recent years, so they stand out pleasantly from other foreign cars, emphasizing the good taste of their owner. Naturally, only the motorist who is familiar with the operating rules and observes them, has an accurate understanding of the maintenance of the Chevrolet Aveo and does not neglect the maintenance regulations, prefers a competent, expedient approach to the diagnosis and repair of vehicles, to expect maximum performance from a car in everything.

Chevrolet Aveo repair manual is able to fill any gaps in knowledge and skills of both the driver and the car service technician. The manuals present models produced since 2002 and equipped with a 1.6-liter gasoline engine (115 horsepower).

These repair manuals for Chevrolet Aveo are perfect for performing a variety of applications on their own.

Firstly, the manuals consist of color photographs, which show everything in detail. In addition, an accessible language of presentation, information content, the availability of additional materials, useful advice for beginners and experienced car enthusiasts – all this helps the reader to navigate, quickly find and select the necessary information to solve specific automotive problems or improve their knowledge and skills in general.

The owner’s manuals provide rules that must be taken into account when driving a Chevrolet Aveo, servicing or repairing equipment.

There is an introduction to the car, an overview of the Chevrolet Aveo design, presented in such a way that each component of the model is equipped with technical characteristics and principles of operation. In addition, there is an unabridged, color-coded Chevrolet Aveo manual, followed by a service section for these American sedans. In order for the car to be in excellent working condition, it is necessary to carry out preventive inspections, checks, replacements, adjustments. All these procedures are detailed in the Chevrolet Aveo service manuals.

There is a wiring diagram for the Chevrolet Aveo. The manual shows how to diagnose and troubleshoot various Chevrolet Aveo problems step by step using standard tools, even if the driver did not have to deal with similar tasks before.

Chevrolet Aveo is a passenger car from GM Daewoo, a Korean subsidiary of General Motors.

The first Chevrolet Aveo, developed by GM Daewoo, appeared in 2002. Production was established in 11 countries. The car was originally called Daewoo Kalos. Created by Daewoo under the name Daewoo Kalos. However, General Motors decided to change the name. The car with the factory index T200 from the very beginning received a four-door version (and also from the very beginning produced a five-door hatchback, but the three-door appeared only in 2005). Engines – 1.2 and 1.4 liters (for some markets also 1.5 and 1.6 liters).

Sales of hatchbacks began in Europe in 2005. In the US, the Chevrolet Aveo began selling in 2003, replacing the discontinued Chevrolet Metro in 2001. In Canada, hatchbacks are sold under the names Suzuki Swift + and Pontiac Wave. In China, Shanghai GM decided to change the name of the Aveo sedan to Chevrolet Lova. In 2005 in the markets of New Zealand and Australia Aveo began to be sold as Holden Barina (until 2005 it was known to us Opel Corsa).

Under the brand name Daewoo Kalos (T200) the car was sold in Europe, the Middle East, and Southeast Africa (in South Africa – Aveo).

At the Shanghai Motor Show in April 2005, General Motors introduced the new generation Chevrolet Aveo (factory index T250) of the 2006 model year in a sedan body, developed jointly by GM-DAT and the PATAK Technology Center in Shanghai, China. The car is built on a modified platform of the predecessor (front McPherson struts, rear torsion bar), but has a completely new body in a new style, updated interior, and improved sound insulation.  The dimensions of the new Aveo have increased – wheelbase 2480 mm, overall dimensions – 4310x1710x1495 mm. The range of engines consists of: 1.4 liters with 94 hp. and 1.6 liters with a capacity of 103 hp

The Chevrolet Aveo RS concept car developed by ItalDesign was presented at the Detroit Motor Show in January 2010. The car is equipped with a 1.4 turbocharged engine with 140 hp. and a torque of 200 Nm.

At the Paris Motor Show in September 2010, a five-door hatchback Chevrolet Aveo of the new generation (factory index T300) was presented, which was developed on the basis of the Chevrolet Aveo RS concept car.

At the Detroit Motor Show in January 2011, a new generation Chevrolet Aveo sedan was presented, which together with the hatchback for the American market will be named Chevrolet Sonic. 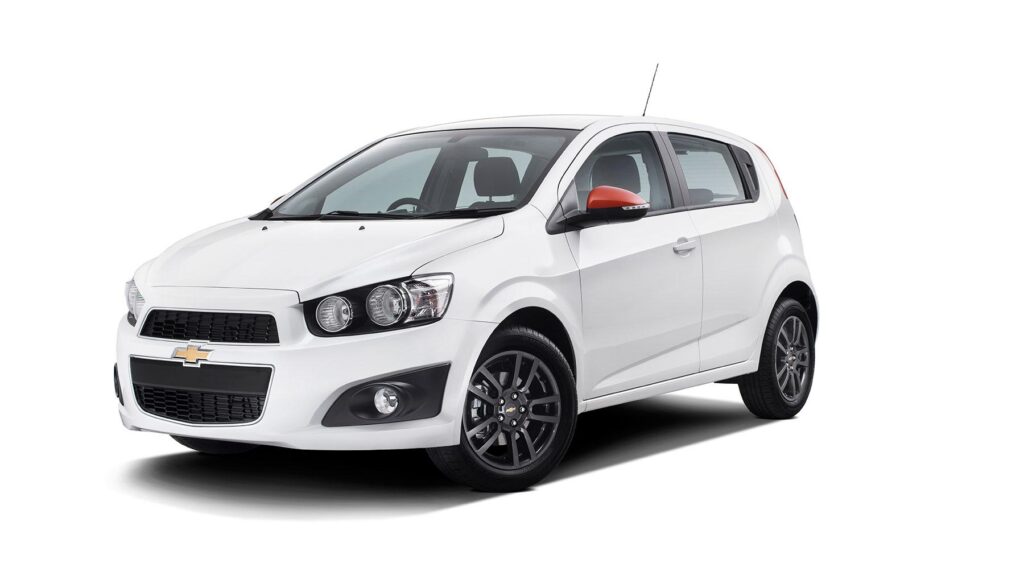