The Buick Lucerne is a front-wheel-drive sedan produced by the American car manufacturer Buick by General Motors and was offered from early 2005 to mid-2011.

It was Buick’s top model in those years and as such was the successor to Buick Park Avenue.

The Lucerne, which was presented for the first time at the Chicago Motor Show in February 2005, replaced both the Buick LeSabre and the Buick Park Avenue, which was the top model in the model range at the time. The Lucerne is based on General Motors’ G-platform, which was also used on the 2005 Pontiac Bonneville.

The Lucerne is powered by the in-house 3.8-litre V6 engine or alternatively by the Cadillac Northstar V8, making it the first Buick model to be powered by an eight-cylinder engine once production of the Buick Roadmaster ended in 1996. The Lucerne was available with an active chassis (Magnetic Ride Control) like the Chevrolet Corvette for a surcharge.

Continuing a Buick tradition dating back to the late 1940s, the Lucerne has small air outlets on the front fenders – what Buick calls venti ports – which are actually functional on this model and help to evacuate hot air from the engine compartment. There are six in total for the six-cylinder version and eight for the eight-cylinder version.

The Lucerne was offered in the equipment variants CX and CXL (with a six-cylinder engine) and as a CXS with a V8 engine. 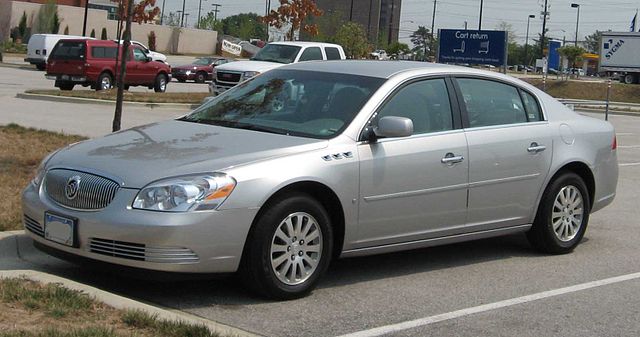