The first generation of Dodge Ram pickups was introduced in 1981. The manufacturer adhered to the designation “D” for rear-wheel drive and “W” for all-wheel drive versions of the car. Similar to Ford pickups, the load capacity index was determined by one of the numbers – 150 (1/2 ton), 250 (3/4 ton) and 350 (1 ton) in the name of a particular modification.

In 1994, the line of Dodge RAM pickups underwent major changes that covered everything from the appearance to the key technical components. Analysis of the wishes of buyers showed their desire to make the car look like a real truck. As a result, the new model has acquired increased size, a huge radiator grille and its own image, no longer similar to similar cars of Chevrolet and Ford.

The load capacity index has become four-digit, now the load capacity has become denoted as 1500, 2500 and 3500 (this numbering is still valid). Modification 3500 was equipped with dual rear axle wheels, and for 2500 there were two options: Heavy Duty and Light Duty. The first of them was also equipped with twin wheels on the rear axle. Each of the modifications was offered in both rear-wheel drive and all-wheel drive.

As on previous models, modifications with all-wheel drive (rigidly connected front-wheel drive) and only rear-wheel drive.

The transfer case in the majority of the let out cars – mechanical (it is also considered more reliable in operation), but there is a complete set and with electric control. Switch position – 4wd lowered / neutral / 2wd / 4wd raised. The front wheels (4wd hi) are connected on the go. Due to the design features of all-wheel drive with a rigid front axle connection, it is not recommended to use it on a surface with good traction.

The fourth-generation Dodge Ram debuted in 2008 at the North American International Auto Show in Detroit.

The new pickup has taken another step towards adapting the truck for everyday use. There were luggage niches in the rear wings, the suspension was improved, the stability unit was added and the interior was transformed (the interior decoration was significantly improved, high-quality plastic was used, lighting devices and regulators were replaced). The appearance of the pickup was determined by modern trends and trends within the brand. Ram still has individuality. 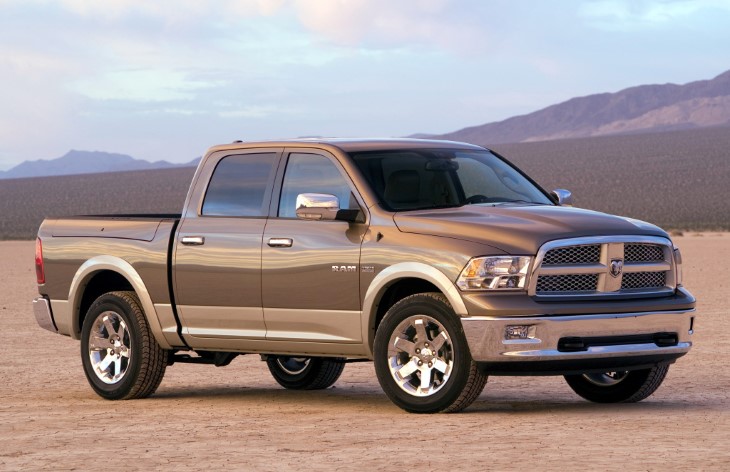