Before us is a Japanese subcompact van – a Toyota bB car, the appearance of which allows us to emphasize the individuality of the car owner and hint that even little-known foreign cars are available to him. However, this model is quite famous, thanks not only to its design, but also to other characteristics – a high level of comfort and safety during the trip, good equipment, and so on. And, of course, I am glad that there are manuals for these subcompact vanes –
Toyota bB repair manual will provide real help to both the master and the driver who is not indifferent to his car.

This manual covers operation and repair (including diagnostics), maintenance and electrical equipment of these subcompact vans in detail, with precise examples. Logically arranged content allows you to quickly find the desired topic and immediately delve into all automotive issues. Each spread of the proposed manual is full of excellent drawings, any, even not so significant, detail is clearly displayed. The manuals provide safety rules for driving and repairing subcompact vans, their design is considered, and there is also a detailed instruction manual for Toyota bB 2000-2005. All the nuances of the maintenance of these cars are described in the next big chapter with illustrative examples of all periodic inspections and adjustments.

If a master or driver is planning to repair, regulate or improve the operation of electrical equipment, then he needs all the electrical circuits of Toyota bB 2000-2005 at hand. As for the diagnosis and repair of these subcompact vehicles, this manual offers the reader detailed, illustrated and numbered instructions for work for each individual case of malfunction.

Toyota bB – subcompact, manufactured by Japanese automaker Toyota Motor Corporation since 2000. Under this name it is issued exclusively for the Japanese market; in the USA since 2004 the similar car is made under the Scion brand as Scion xB. The name of the model bB (“BBC”) comes from the English phrase “black box” (black box) to associate with the infinity of as yet undiscovered possibilities.

The first generation of the car was created on the basis of Toyota Vitz and Toyota Funcargo. The second generation Toyota bB appeared in late 2005. The first generation was equipped with four-cylinder in-line engines with a capacity of 1.3 and 1.5 liters and 88, 105 (4wd) and 110 hp. accordingly, it is equipped only with an automatic transmission with a switch on the steering wheel. There are versions with front-wheel drive, as well as with permanent all-wheel drive. It is equipped with ABS, BAS, ESP, the assistant of rise/descent from the mountain. The bB-based pickup body, called Open Deck, was produced in small series.

The first generation Toyota bB hatchback, featuring an expressive “cubic” design, was produced from 2000 to 2005. This car was created on the platform of the Vitz model and was equipped with one of two engines: a volume of 1.3 liters (88 hp, front-wheel drive) and 1.5 liters (105-110 hp, front-wheel drive or four-wheel drive). The transmission is automatic only.

The car also had a version with a Toyota bB Open Deck pickup body.

In 2004, the sale of this model began in the United States under the Scion brand.

The compact hatchback Toyota bB is sold only in the Japanese market and is positioned as a youth model. The car has a four-cylinder engine with a volume of 1.5 or 1.3 liters and a capacity of 92 or 109 liters. with., transmission – automatic. The 1.3-liter version can be front-wheel or all-wheel drive.

The second generation Toyota bB has been produced since 2005. The twins of this model are Daihatsu Materia / Coo and Subaru Dex cars. 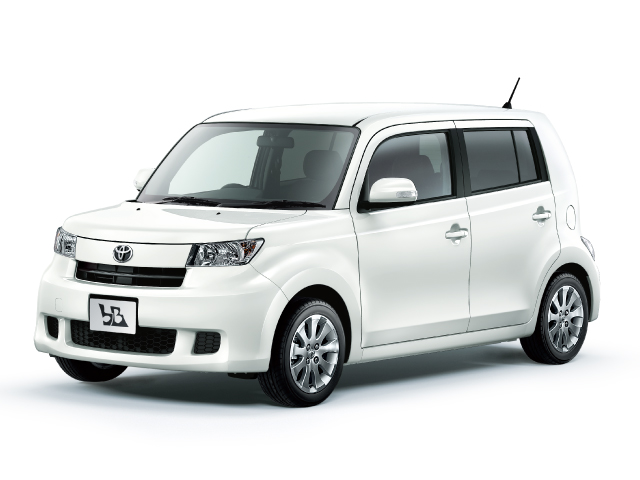