The Suzuki Carry is a small transporter of the kei car class, built by the Japanese vehicle manufacturer Suzuki Motor Corporation since 1961 and now in its 12th generation. The van version was replaced by the Suzuki Every in 1982. The series, partially marketed as Suzuki Super Carry in Europe, was also built by different manufacturers under different names. Vauxhall built it as Vauxhall/GME and Bedford Rascal and Daewoo as Daewoo Damas and Daewoo Labo and Chevrolet CMV and CMP for South Korea, Latin America and North America respectively. Suzuki also produced badge engineering models as Chevrolet CMV/CMP and Chevrolet Super Carry for Latin and North America, Holden Scurry for Australia and Ford Pronto for Taiwan. In India, the 8th generation, now modernized, is produced as the Maruti Omni. Another home market offshoot of the 9th and 10th generations was the Autozam Scrum, as well as the 9th, 10th and 11th generations of the Mazda Scrum.

The ninth Carry generation appeared in March 1985. In the new model, the roof of the van version was raised by a few centimeters to ensure a more comfortable standing height. The chassis codes were DA/DB71 for the 543cc van models (DB 4WD) and DA81 for the 539cc two-stroke pickup which remained available until the Carry Pick -up appeared in July 1986 with the new front. The curb weight is given as 600-780 kg.

On the home market there was now also a sister model as Autozam Scrum or Mazda Scrum.

The tenth generation Carry (DC/DD51 Pick-up) (DE/DF51V Van) appeared in September 1991. It was also produced again as Autozam and Mazda Scrum but was hardly exported. The only engine available was the previous generation naturally aspirated 657 cc F6A with 5-speed manual or 3-speed automatic transmission. The body was completely new, appeared much smoother and originally had small rectangular headlights. The pickup’s chassis was largely unchanged, but with a slightly longer wheelbase. Overall, this series had a significantly longer wheelbase, and the engine was now mounted just in front of the rear axle. In addition to the rear-wheel drive, there was also an all-wheel drive version. The curb weight is given as 650-720 kg.

In January 1999, the 11th generation Carry appeared as a pick-up. There was no longer a separate panel van or minibus version, but this was derived from the Suzuki Every. Only the Mazda Scrum was marketed under one name in all body variants, there was no longer an Autozam model. Like its predecessor, the new generation was no longer offered outside of Asia. The engine was the F6A SOHC 657 cc naturally aspirated engine with and without a turbocharger, which was now installed as a front engine, as before with a 5-speed manual transmission and 3-speed automatic transmission and optionally with all-wheel drive instead of front-wheel drive. The curb weight is given as 650-780 kg.

The 12th Carry generation has been available in the home market since August 2013. It is powered by the 0.6 liter R06A DOHC petrol engine with variable valve timing and 37 kW (50 hp) at 5700 rpm. Again, in addition to the front-wheel drive, there is also a 4WD version and a choice of 5-speed manual or 3-speed automatic transmission. Only the short version of the predecessor is available as a wheelbase. By moving the driver’s cab further forward, however, a greater loading length of 2030 mm was achieved compared to the previous short version. The loading area is now easier to load with pallets due to better side design. 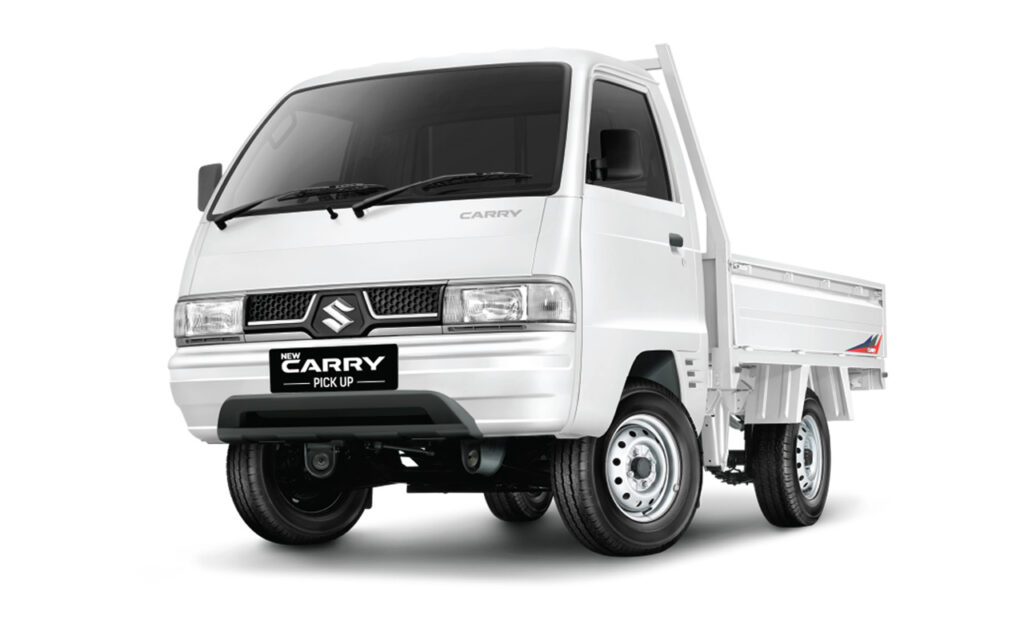