The 1983 Suzuki Cultus debuted at the Tokyo Motor Show. The first generation was a project started by General Motors as M-car. When the company realized that the project would not be profitable enough, all the unfinished design was sold to Suzuki in exchange for a five percent stake in the company. Suzuki completed the design and development work and introduced the car for sale in October 1983 at the Tokyo Motor Show for the Japanese market as the Suzuki Cultus.

In September 1988, the second-generation Suzuki Cultus debuted in Japan. The car is built on the GM M. platform. Chassis, engines and transmissions were developed by Suzuki, being mostly modified versions of the first generation Cultus. The second generation offered a new style and independent suspension of all wheels. The turbocharged three-cylinder version remained quite popular in Canada, which was the only market for a version that was not even available at home in Japan.

The third generation was introduced in the fall of 1995 and was mostly a development of the second generation, not a completely new model. The car was available with a 1.0-liter gasoline engine with 53 hp. or a 1.3-liter engine with 68 hp, since 2001 85 hp There was no longer an all-wheel drive version. The car was made in Hungary.

The Swift was available as a 3- and 5-door hatchback and a 4-door sedan. The luggage compartment can accommodate 290 liters of luggage or 950 liters with the rear seat folded down.

From the fall of 1995 to the end of 2003, an almost identical Subaru Justy was sold. This model had a standard all-wheel drive.

In 2002, the prototype Suzuki Concept-S was presented at the Paris International Motor Show, and a year later the Suzuki Concept-S2 was presented at the Frankfurt Motor Show. The look of these prototypes later migrated to the fourth-generation Swift, which began production in 2005. The modern five-door hatchback from Suzuki has the largest class in the class wheelbase (2390 mm), width (1690 mm) and track (front / rear – 1470 mm / 1480 mm). Already in the basic complete set there are 15-inch wheels. The main engines for the 2005 Suzuki Swift are 16-valve in-line 4-cylinder petrol engines with a displacement of 1328 cc (91 hp) and 1490 cc (110 hp), also available on the European market 1.3-liter turbodiesel from Fiat. The front suspension of the hatchback is made on MacPherson struts, rear – on torsion bars. There are front- and all-wheel drive modifications, each of which can be equipped with a 5-speed manual transmission or 4-speed automatic transmission.

On June 10, 2010 at the Magyar Suzuki Corporation (Esztergom, Hungary) the presentation of the 2011 Suzuki Swift took place. The car looks like its predecessor, but its wheelbase has been increased by 50 mm (up to 2430 mm), while the length has increased by 90 mm (increased to 3850 mm).

The hatchback is built on the Heartect platform, which debuted in 2015 and is used to produce Baleno and Ignis hatchbacks. The car is equipped with a 1.2-liter 4-cylinder Dualjet engine and a 1.0-liter Boosterjet Turbo gasoline engine for the Japanese market capacity. 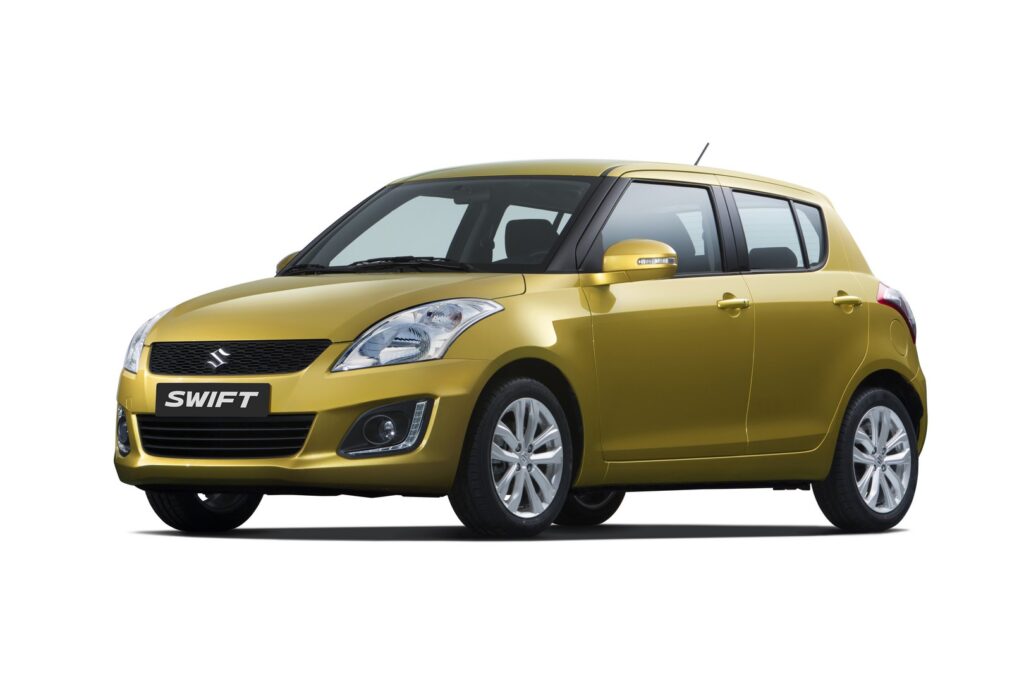