Alfa Romeo 145/146 – Three and five-door hatchbacks of a small family class, produced by Alfa Romeo from 1994 to 2000. For the first time, cars were represented at the 1994 Turin Auto Show. Production 145 began in July 1994, 146 – 6 months later. Unlike the three-door version, the five-door had a small trunk edge, which makes it possible to classify its body type like Liftback. The models are built on the Fiat Type Two platform (TIPO DUE) in conjunction with Fiat Bravo / Brava (respectively, 3 and 5-door versions) and were made simultaneously with them as more luxury variants.

The design model was largely inherited from Alfa Romeo 164, but unusual bumpers were made in favor of not design, but security. The model was positioned as a continuation of Alfa Romeo 33 series. Upon admission to the sale of the year, the hatchbacks were equipped with 4 types of four-cylinder engines – horizontally located opposit gasoline “atmospheric” volume of 1.4; 1.6 and 1.7 liters, and 1.9-liter inline turbodiesel. After a year, the flagship models Cloverleaf (145) and Ti (146) received a 2-liter engine, which was received from the older model Alfa Romeo 155. In 1997, all opposite engines set aside on the previous model and had a rather large mass were replaced with more modern Row four-cylinder engines from the Twin Spark series (engines had a ignition system with two candles on the cylinder), also updated the turbo code and interior, the ventilated front discs appeared, and the driver’s airbag began to install in all configurations. In 1998, a 2-liter unit has changed slightly, and a new piece of Junior has appeared with a slightly modified interior and exterior.

An exceptionally 5-speed manual transmission was used as a transmission. The most powerful versions (1.8 and 2.0 liters) had a more responsive steering “Quick-Rack”, as well as a harsh suspension. 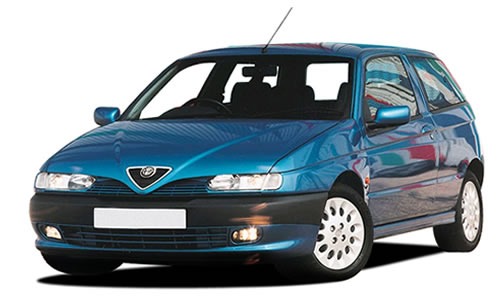