Alfa Romeo 164 – Passenger front-wheel drive car manufactured by Alfa Romeo. Was released from 1987 to 1998. Refers to the European segment E. was produced in a body sedan. The car was built on a single platform with Fiat Croma, Saab 9000 and Lancia Thema.

The design was developed by Enriko Fumia from the studio Pininfarina. Developed by this studio rectilinear stylization variously distinguished him from the project colleagues. And a thought-out brand emblem, located on the radiator grill, gave him refinement. By creating a sedan 164, the automaker abandoned the traditional variant of the red coupe. Unlike the first Alfa models, the five-seater sedan 164 had a drive on the front wheels and was very similar to Fiat. Sedan 164 is an attempt company with German competitors for a seat in the segment of high-quality cars. And the Alfa Romeo 164 received its fate of success in the European market both among buyers and critics. For power in 164, from the very beginning, a powerful 3.0-liter V6 Busso engine is 130 kW and 245 N.M. The pair of 4-step automatic gearbox was made. In 1993, there were changes that affected many aspects of equipment. The release of the car stopped in 1998 and at the moment it can only be acquired in the secondary market. An interesting fact on this sedan is that 164 became the last car company Alfa Romeo before bought Fiat.

In the autumn of 1992, Alfa Romeo has updated this model by calling it 164 Super.

Versions with 2- and 3-liter engines. The feature of 2-liter engines was that the Twinspark system has already been used. Also a special engine was released by a 3.5-liter V10 with a capacity of 620 hp, and the version with it was called Alfa Romeo 164 Pro-Car. 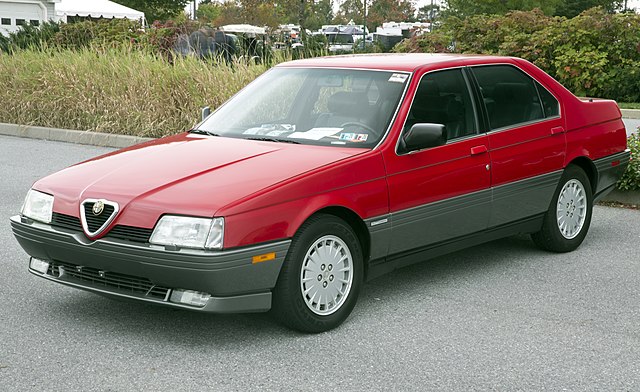