For all car enthusiasts who are not indifferent to their four-wheeled partner, as well as service station employees and garages, the presented Toyota Harrier repair manuals, operation and maintenance of these cars produced in the period from 1997 to 2019 are intended. The manuals consider models operating on 2AZ-FE (2.4 l) and 1MZ-FE (3.0 l) gasoline engines.

This Toyota Harrier manual is an excellent example of a practical guide for every day, with the help of which the driver will be able to follow the recommendations for diagnostics and repair, and will receive comprehensive information about his car.

In the initial section of the Toyota Harrier service manual, theoretical data are reported. This is a comprehensive description of the internal and external structure of the machine, the main parts, their location, principles of operation. The driver will also need a detailed instruction manual for Toyota Harrier, by studying which, you can get to know your car better. A separate chapter is devoted to maintenance – there is a schedule and scope of maintenance work, part numbers are indicated.

The following section of the Toyota Harrier manual discusses possible vehicle malfunctions, their causes and remedies. It is understood that a driver with at least a little experience in this area will be able to carry out many diagnostic and repair work on his own. To do this, each action is supplied with well-chosen drawings, and the descriptions of work to identify the causes of the malfunctions and subsequent repairs are given as detailed and clear as possible, step by step, including even intermediate procedures. Thanks to this, the driver will be able, without outside help and without errors, following the proposed sequence of actions, to assemble-disassemble, lubricate, replace, adjust and actually repair all the main components of the car, including the engine management system, the brake system (working with them is described in more detail), gearbox, steering and everything else.

The manual contains detailed electrical diagrams of Toyota Harrier, descriptions of checks of electrical equipment are given. If, for some reason, self-repair fails, then even when contacting a car repair shop, the driver will be able to learn from this manual all the details of the upcoming repair work and discuss issues of interest with the masters on an equal footing. Thus, a theoretically savvy car owner will not have to spend extra money on various additional procedures or unnecessary spare parts that may be imposed on him in a car service.

The appendices to the Toyota Harrier manuals contain a lot of useful reference data regarding the limits of permissible wear of the main parts and their mating dimensions, the choice of lubricants and working fluids, and much more.

In 2013, a new generation of Harrier was introduced, which is a separate model from the RX, built on a different platform, but in a similar style.

In 1997, Toyota introduced the Harrier crossover to the local market, its “export” version debuted a year later, called the Lexus RX.

The base engine was a 2.2-liter (140 hp), the more powerful version was equipped with a three-liter V6, developing 220 hp. with. Both engines were equipped with a four-speed automatic transmission, and the drive could be full or front. Since 2000, a 2.4-liter power unit (160 hp) has been installed on the Harrier instead of a 2.2-liter one.

The second generation Toyota Harrier crossover was sold in the Japanese market from 2003 to 2013. In other countries, it was known as the Lexus RX, in 2009 Lexus had a generational change, and the Harrier remained unchanged on the assembly line.

Initially, the car was equipped with gasoline engines 2.4 and V6 3.0 with a capacity of 160 and 220 liters. with. respectively. Later, the six-cylinder engine was replaced with a more powerful V6 3.5, developing 280 hp. with. Toyota Harrier had front-wheel drive and all-wheel drive versions, all versions were equipped with automatic transmissions.

In 2005, a hybrid version of the crossover debuted with a powerplant consisting of a V6 3.3-liter gasoline engine, an electric motor and a CVT.

The petrol version was introduced on December 2, 2013 [1]. The hybrid version premiered on January 15, 2014. In addition to the XU30 series, the new model also replaced the Toyota Vanguard. Unlike the second and third generation Lexus RX, which are built on the K platform, the XU60 is built on the New MC platform along with the fourth generation Toyota RAV4.

The car is offered in Premium, Elegance and Grand trim levels in petrol and hybrid versions with front-wheel drive and all-wheel drive. 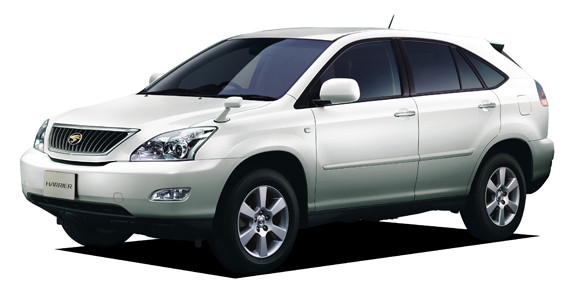