The Japanese subcompact car, to which the next manuals are devoted, has always been in good standing with motorists who are well versed in technology and know everything about the possibilities of modern vehicles. Stylish, powerful and fast Toyota Belta will certainly give odds to its European competitors, especially if the driver wants and knows how to take care of it, handles the equipment correctly, and if repair is needed, he does it according to all the rules and without delay.

The proposed Toyota Belta repair manual will certainly dispel any doubts and questions that a driver who is not indifferent to his car or a car service master who is interested in the high result of his work. After all, these manuals contain everything related to the operation, maintenance, diagnostics and repair of cars of this brand, produced since 2005 and having gasoline engines with a working volume of 1.0, 1.3, 1.3, 1.5 liters.

In the first part of the Toyota Belta repair manual, a lot of general issues are devoted, without which it is impossible to properly control the car, and even more so to interfere with its work. For example, safety rules are considered, a general overview of the car is given, and many useful recommendations are given on behalf of experienced craftsmen and users. The driver will be helped to thoroughly study his Toyota Belta with a detailed review of the machine design, which includes descriptions of technical characteristics, operating functions and rules for controlling all units, components and systems of the car.

Expands this topic with a detailed instruction manual for Toyota Belta, which includes important tips for craftsmen and motorists. The work within the framework of vehicle maintenance is separately scheduled, with visual descriptions of all regulated checks and inspections.

All Toyota Belta wiring diagrams shown on the pages of this manual will be an excellent orientation for anyone who starts repairing or adjusting the electronics of the car and wants to achieve maximum results. The applied section of the manual includes detailed instructions and pictures describing how a driver or a technician can competently and step by step cope with a particular problem, having only these manuals and a set of standard tools at hand. Provides accurate descriptions of diagnostics and repair of the engine, brake system, steering of Toyota Belta, as well as tires and wheels, headlights and all other elements of this vehicle.

The successor to the discontinued Toyota Platz sedan, the Belta has grown in size from the previous generation. The interior volume is larger than in the 2000-2007 Toyota Corolla models. The Belta went on sale in Japan on September 1, 2005. The car was equipped with 1.0-1.3 liter engines. Export sales started in 2006. As options for the transmission, the manufacturer offered an electronically controlled continuously variable variator Super CVT-i, a four-speed “automatic” and a five-speed “mechanics”.

The name “Belta” is an abbreviation for the Italian words “bella gente”, or “beautiful people”

Toyota Vitz (XP90) and Belta (XP90) share the same platform and transmission. While the original Toyota Vitz and Toyota Platz look alike, the Vitz hatchback and Belta sedan are even more connected. The Belta is the only subcompact sedan designed, built and sold in Japan with no direct competition in the Japanese domestic market, as Vitz does not offer a sedan version. 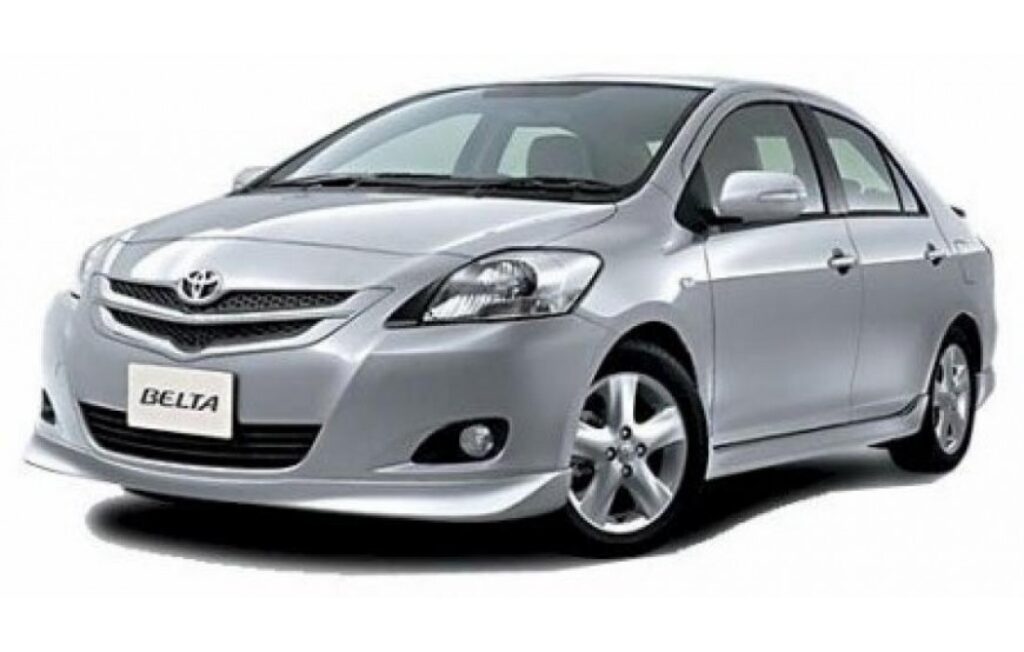