The subcompact, four-seat Sunbird was introduced in September 1975 and was produced from model years 1976 to 1980. The predecessor of the first generation Sunbird was the Chevrolet Vega, from which it derived its wheelbase and body width. Sunbird was built on the H platform. The car’s competitors were Toyota Celica, Datsun 200SX, Ford Capri and Ford Mustang II. The Sunbird did not share any elements with the Holden LX Sunbird.

In 1982, the rear wheel drive Sunbird was replaced by a new front wheel drive compact car called the J2000. In sedan, coupe, station wagon and hatchback body styles, the J2000 was equipped with 1.8- or 2.0-liter four-cylinder engines. The J2000 received a platform from GM, the J-Body used in North America by the Chevrolet Cavalier, Oldsmobile Firenza, Buick Skyhawk and Cadillac Cimarron.

In 1983, the “J” prefix was dropped. This was an attempt to market the J2000 as a smaller version of the Pontiac 6000, as they had a similar appearance. Both engines were replaced by new SOHC 1.8-liter fours supplied by the Brazilian division of General Motors. This engine received an electronic fuel injection system, unlike the carburetor that was used on engines until 1982, and had a power of 84 hp. With. (63 kW). A new 5-speed manual transmission was optionally available. A new convertible called the 2000 Sunbird also appeared in 1983.

The release of cars under the name Sunbird continued until 1994. Some models were equipped with hidden headlights, which originally appeared on the Isuzu Impulse. The engines remained the same: in-line fours with a volume of 2.0 liters and a power of 96 hp. With. (72 kW), with a 165 hp turbo version. With. GM stopped using the Safari name for the Sunbird wagon model.

In 1989, the base model received a more aerodynamic front bumper and the model was renamed “LE”. The LE coupe joined the lineup with the same performance as the LE sedan but sold at a slightly lower price. The SE sedan was discontinued, however, a new instrument panel appeared on all models. The car somewhat resembled the Pontiac Grand Prix, redesigned in 1988. The most notable change from the previous dashboard is the placement of the stereo. A redesigned AM/FM stereo unit was placed high on the dash. If a cassette player or CD player was installed, they were located at the bottom of the panel. 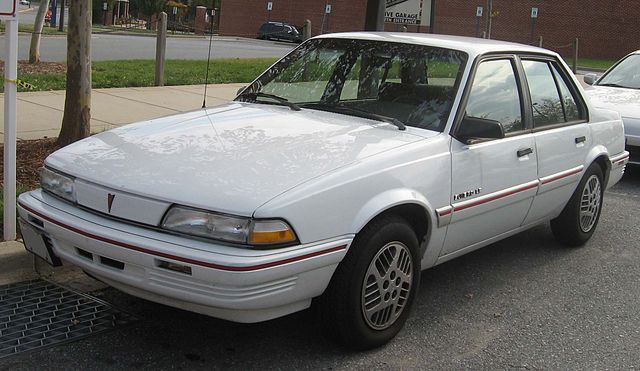