The models covered in this tutorial are 2WD & 4WD gasoline powered models produced by the Japanese Toyota Motor Corporation:

Toyota Voxy – a minivan has three rows of seats in a 2-3-3 scheme and belongs to one-box, like the Toyota Noah, although it has a more sporty exterior design. It has been produced since 2001-2007 with a 1AZ-FSE engine (2.0 l D-4). The vehicle is equipped with sliding side doors on both sides. Thanks to the front-wheel drive, the Toyota Voxy makes getting on and off the passengers easier;

By studying these manuals, you will receive the necessary knowledge and skills not only for the operation and maintenance of Toyota Noah / Voxy cars, but also for repairing in case of sudden malfunctions. All possible, detailed malfunctions, and their 464 codes, conditions for their occurrence and their possible causes, methods for their elimination, mating sizes of main parts and limits of their permissible wear, recommended lubricants, working fluids and catalog numbers of spare parts required for maintenance, the sizes of the recommended and allowed tires and disks, you will also find on the pages of the publication. In addition, you may be interested in descriptions and instructions for diagnosing 13 electronic systems.

Toyota Noah – eight-seater or seven-seater five-door minivan. The sliding rear door is on both sides. Produced from 2001 to the present. Located in the model range lower than the Toyota Previa / Estima and Toyota Alphard, and higher than the Toyota Sienta. Replaces LiteAce / TownAce Noah on the market, keeping the model code “R” and generation numbering. Noah has two twin versions. Initially, it had only one “brother” Toyota Voxy at launch, the car is a more sporty version of the Noah, with stylistically separated headlights and transparent taillights, but since the third generation, a luxurious version of the Noah called Toyota has been introduced. Esquire, with a different grille design and a more premium interior. Noah is exclusive to Japanese dealerships Toyota Corolla Store, Voxy – to Toyota Netz, and Esquire – to Toyopet Store. The main competitors of the model on the market are Honda Stepwgn, Mazda Biante and Nissan Serena. Sales in Japan are exacerbated by the fact that the external dimensions of the car meet Japanese standards for compact cars, and the engine capacity is less than 2,000 cubic meters. cm, which reduces the annual road tax.

Toyota Voxy has three rows of seats according to the 2-3-3 scheme and belongs to the one-volume, like Toyota Noah, although it has a more sporty exterior design. The car is equipped on both sides with a sliding door. Thanks to the front-wheel drive in Toyota Voxy facilitated boarding and disembarking of passengers.

In the Toyota Noah, you can easily remove the rear row of seats and get a large trunk to load a full set of things for going out in nature with family and friends. The ground clearance of the car is 155 mm. The complete set of parts of cars Toyota Voxy has a suspension bracket with electronic control. Front brakes – disc with ventilation, rear brakes – drum.

The second generation Noah and Voxy went on sale in June 2007. The facelift model was presented in April 2010. Issue was terminated in January 2014.

For 2007 models, only Japanese models have the G-BOOK function, telematics option is available as a subscription service. 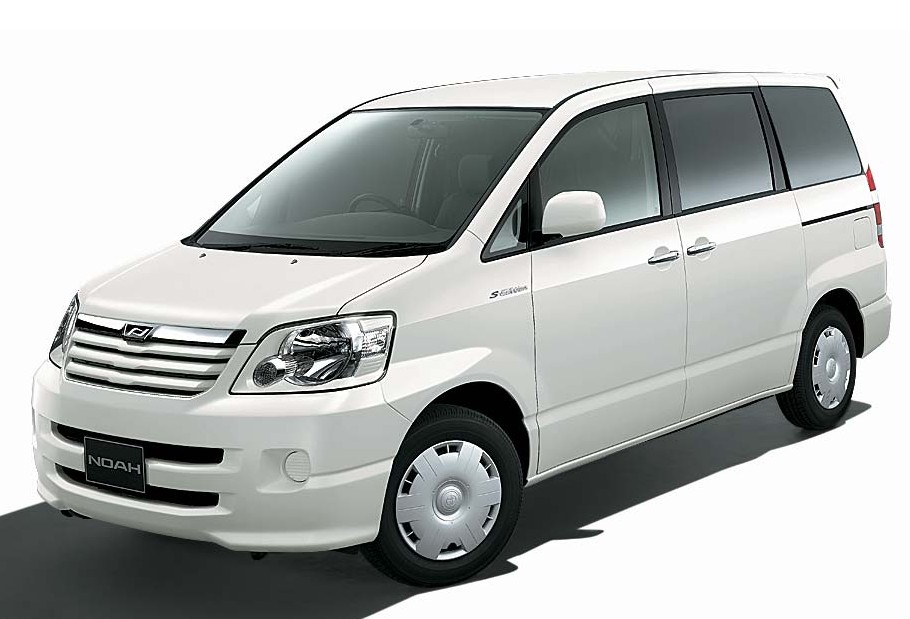