The Toyota LiteAce / TownAce 2WD & 4WD repair manual will tell you how to competently, quickly and economically solve any urgent tasks related to the operation, maintenance, diagnostics and repair of a minibus. It contains comprehensive information that the driver can turn to in any disputable case in the garage or on the road, as well as a workshop or car service master who wants to know and be able to do more and find a way out even from non-standard repair situations.

Toyota LiteAce / TownAce repair manual will not leave any responsible car enthusiast indifferent, as it is a complete reference publication that will be interesting and useful to both a sophisticated specialist and a novice driver.

In the manuals, the reader will find not only the basic information that everyone needs but also additional information, selected by the authors according to the criteria of accuracy, relevance and scientificity. For example, all the precautions required when working with a Toyota LiteAce / TownAce are listed. The manuals also contain a detailed analysis of the design of the specified minibus, indicating the location, functionality, technical data, parts (if any), control techniques for all units, assemblies, systems and devices of the vehicle.

The continuation of this chapter is a separate complete operating manual for Toyota LiteAce / TownAce, with which you will no longer make any gross mistakes while driving your iron partner. As you know, machine maintenance is necessary to guarantee the safety of all road users.

The manual contains the stages of all preventive examinations and procedures within the framework of regulated maintenance, the frequency of these works is indicated, there is a list of the necessary tools and materials. Working with the electrical equipment of a minibus requires attentiveness and a certain amount of applied knowledge from the contractor, but in any case, it is necessary to take into account the Toyota LiteAce / TownAce wiring diagrams for all configuration options that are in the manual.

Toyota LiteAce is a minivan, similar to the Toyota TownAce truck. The presence of single-platform counterparts is due to the peculiarities of Toyota’s sales system. In addition to Japan, often found in countries with left-wing movements – Australia, Britain, as well as in Russia. Analogues with a left-hand drive for the markets of the United States and Europe (1983-1991) were also named Toyota Space Cruiser and Toyota Model-F.

Until 1986, only the rear-wheel-drive version was produced, then there were all-wheel-drive minibuses and minivans with a front axle, forcibly connected (Part-time 4WD).

As a result of a change in the model range of minivans at the end of 1996, under the influence of restrictions in some countries on hoodless passenger minivans, the engine location was moved forward, the hood appeared, the Part-time system changed to permanent all-wheel drive (Full-time 4WD). The Y-Series (3Y-EU) petrol engines have been replaced by the more powerful S-Series (3S-FE). The passenger version was named Toyota Lite Ace Noah (1996-2001), then became Toyota Noah and Toyota Voxy. The cargo van and the minibus are issued under the former name.

Since 2008, the van is available only for single-wheel drive and is equipped with a 1.5-litre gasoline engine with manual transmission and automatic transmission. 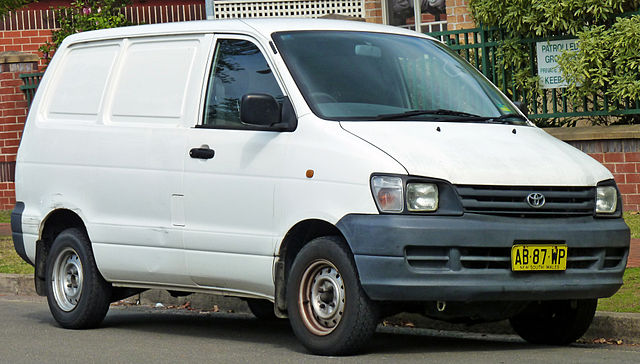