In the early 1990s, after the debut of the Lexus brand, the automotive press reported the release of a future mid-range coupe to compete with luxury coupes from other brands such as the Acura Legend coupe, Infiniti M30 coupe and Cadillac Eldorado. At this time, Toyota did not have a real luxury coupe in its lineup. The coupe was to receive a V8 engine, from the LS 400 sedan and rear-wheel drive.

The first generation SC lasted in production until July 7, 2000.

The second generation SC is offered in the form of a rear-wheel drive roadster with a rigid folding top that combines sportiness and elegance, the coefficient of drag is 0.29 units. The V-shaped 8-cylinder Lexus SC430 (3UZ-FE) engine with a volume of 4293 cm3 develops a maximum power of 278 hp. at 5600 rpm The only gearbox available is a 6-speed automatic transmission.

During the hard folding top transformation procedure (electric drives, operation takes 25 seconds), the Lexus SC430 boot lid not only opens, but also moves back so that the aluminum roof elements can move freely.

Mark Levinson’s audio system consists of eight speakers and a subwoofer and includes an Automatic Sound Levelizer system that automatically adjusts the volume depending on speed and roof position. The Lexus SC430 already comes with i-AFS adaptive lighting. 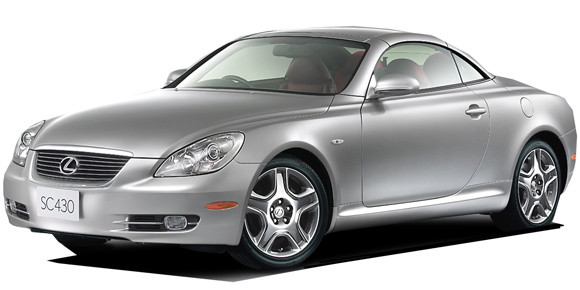