Daihatsu Applause – A five-door hatchback Japanese company Daihatsu, which was first introduced in 1989 at the Geneva Motor Show.

The prototype under the code name “MS-X90” was shown in the Geneva Motor Show in March 1989, the serial version received the name “Applause”. Unlike the precursor, the Charmant model, which was made on the basis of Toyota Corolla, Applause was designed by Daihatsu its own. Sales began in July 1989.

Shortly after the debut there was a campaign for recalling machines due to problems with automatic transmission and generator. Later, another – due to problems with a brake system and a fuel tank, with which a number of incidents with fire damage were associated. All this negatively affected the reputation of the model and caused a drop in sales. The manufacturer corrected the problem in 1990, emphasizing the improvement of the changed name – Applause θ (Theta). Also changes were made in the range of cars.

This did not bring the proper effect and for the revival of sales in July 1992, Feyslifting was performed: a new front mask with other radiator lattices appeared, the size of the front and rear bumper has increased, the shape of the rear spoiler has changed. Later, the name of the car was returned to the simple “Applause”.

In 1994, the full-sized version of 16ZI 4WD was removed from production.

At that time, Daihatsu could not afford to develop a completely new model, so in 1997 decided to carry out modernization again. Submitted at the Frankfurt Motor Show in September 1997, Applause received an updated front and rear parts. In the external processing of this version was dominated by chrome. Thanks to a brilliant lattice (which now became united with a hood), license plate frames, headlights and blocks of rear lights car received almost a British view. The interior has also updated: the low panel of the 80’s gave way to a more modern with inserts with imitation of a tree. Driver and passenger airbags have become standard equipment, navigation can be installed as an additional option.

Modernization, however, did not help an obsolete model – sales from year to year only worsened. In March 2000, production was completed. Altis, which appeared in the domestic market of Japan as a successor, was not his own model, but was an upgraded version of Toyota Camry Gracia, which is produced under the brand Daihatsu. There were no replacement on export markets. 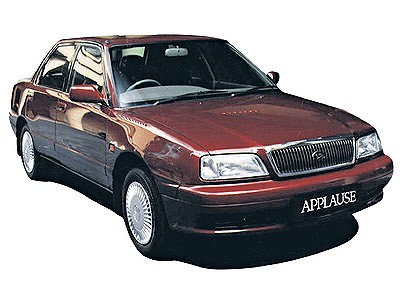