The Chrysler Neon is a compact car sold in Europe, Mexico, and Canada under the Chrysler Neon name, but under its original name only in the United States. This front-wheel drive car was introduced by Chrysler in January 1994 as a 1995 model under the Dodge and Plymouth brands, which were part of the Chrysler Corporation. Under the name Chrysler, the model was exported to Japan, Europe and Australia, where Chrysler was the first brand from the corporation since 1981. And in Mexico, Canada and Egypt, the model has already gone under the names Plymouth and Dodge. This car replaced a whole line of previous models: Dodge Shadow, Plymouth Sundance & Duster and Dodge & Plymouth Colt. And the 2-door coupe replaced the Plymouth Laser in the Plymouth lineup. Neon received a huge number of versions and modifications during its production, which ended on September 23, 2005.

The car was also sold under rebranding under the name Dodge and Plymouth in the US and Canada. And in Mexico, Europe, Australia and other major export markets, the car was sold under the name Chrysler Neon. At the Neon’s release, Chrysler Corporation President Robert Lutz said, “The old folks in Detroit say, ‘Fast, good, and cheap. Get yourself two.’ “We (the Company) refuse to accept this.” The Japanese press dubbed the Neon the “Japanese Car Killer” because the car was too cheap compared to Japanese cars of the same class.Neon received praise, prizes and power as a result of winning the competition against the Honda Civic DX (102 hp), Honda Civic EX (127 hp), Nissan Sentra (115 hp), Ford Escort ZX2 (130 hp), Toyota Corolla 115 hp and Chevrolet Cavalier Base and LS models (120 hp) .) In tests of the DOHC engine with 5-speed manual transmission on the Neon R/T, the driver reported that it accelerates to 100 km / h in 7.6 seconds. The first generation Neon also participated in SCCA in the form of autocross and showroom stock road”. 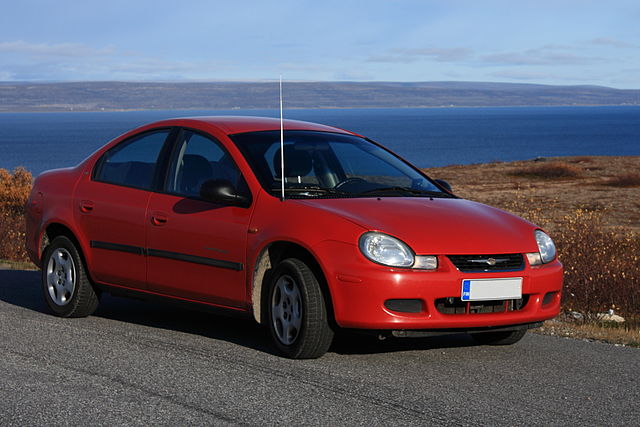