In honor of the 50th anniversary of the founding of the Buick brand, the Skylark was introduced in 1953. Engineer Harley Earl worked on its design. The new car was based on the Buick Roadmaster.

Skylarks of the first generation were produced mainly with a 2-door convertible body. It belonged to the “personal luxury car” class and was one of the most expensive Buick models, costing over $ 4000.

After 1955, the Skylark index briefly disappeared from the Buick lineup and was revived in 1961, but only as a complete set of the Special model. The only differences between them were unique emblems and external design.

The next year, 1962, the Skylark becomes a separate model, which henceforth belongs to the class of mid-size cars (Mid-size). Body choices included a 2-door convertible and a 2-door hardtop. The cars were equipped with a V8 engine with a displacement of 215 inches ³ (3.5 liters).

In 1972, General Motors revises its line of midsize cars and the Skylark index is once again abolished. It is replaced by the Century model.

In 1975, Skylark is reborn. From now on, it is based on the Chevrolet Nova X-platform. From that moment on, all subsequent generations of Skylark belong to the class of compact cars. Initially, the coupe and 2-door hatchback bodies were produced, since 1976 – the 4-door sedan.

The fourth generation Skylark was also produced in Iran under the name Buick Iran.

In 1980, the Skylark is still produced on the X-platform, but is based on the Chevrolet Citation. Body choices were limited to the coupe and 4-door sedan. It was produced without any major changes until 1985.

The sixth generation Skylark was based on the Buick Somerset N-platform and was produced until 1992.

In 1992, Skylark undergoes another redesign. Coupe production continued until 1997, sedans – until 1998, after which the production of Skylark finally ceased. 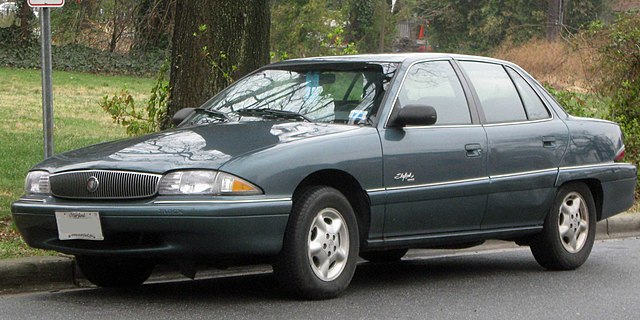