The joint development of Audi and Porsche appeared in March 1994. The car, called RS2 Avant, turned out to be very non-trivial in nature. Under the Audi 80 Avant body, decorated with stylish bumpers and cute 17-inch wheels, hid a 5-cylinder turbo engine with 316 “horsepower”, four-piston Brembo brakes and all-wheel drive transmission with 6-speed manual transmission. This allowed the 1600-kilogram wagon to accelerate to 100 km / h in 4.8 seconds and reach 262 km / h. By the way, Audi RS2 Avant has not lost relevance after 10 years – according to overclocking tests, it was not inferior to Chevrolet Corvette C5 and Porsche 911 in the 996th body. A total of 2,891 copies of the RS2 were released by July 1995.

Audi RS2 Avant was equipped with an engine similar to that installed in the Audi S2 – 2.2 litres. turbocharged, but with a capacity of 316 hp Acceleration to 100 km / h in 4.8 seconds took place, and the maximum speed was 262 km / h, the car used a 6-speed gearbox.

The Audi RS2 Avant was available mainly in a station wagon body, although 4-door sedans were also officially produced, including one for the head of the RS2 development program. The Audi RS2 was at least partially assembled at the Porsche-Rossle-Bau plant in Zuffenhausen. Before the production of the RS2, the Porsche assembly line in Zuffenhausen was busy producing the Mercedes-Benz 500E body. The RS2-Porsche connection can be illustrated by the dual scheme of the Porsche brake system in the RS2, 7Jx17 alloy wheels, which is identical to the Porsche 911 Turbo wheels and side mirrors, also borrowed from the Porsche 911 Turbo. In addition, the word “PORSCHE” was written on the factory logo attached to the trunk and front grille, as well as on the intake manifold of the engine.

Porsche added to the RS2 more powerful brakes, large stabilizers for lateral resistance to the front and rear, made a small tuning of the interior, resulting in a supersport wagon. Porsche’s participation in the project fully understood that the coupe body model would not be produced, as it was very close to its Porsche products.

In 1996 the car was taken out of production. 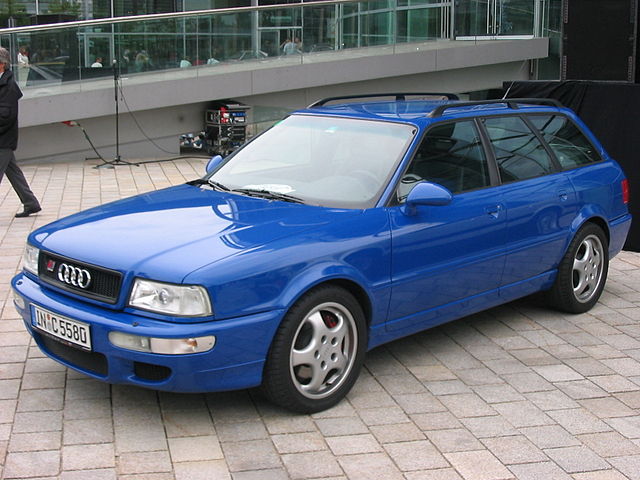