Mercury Tracer – a compact class car produced under the American brand Mercury in 1987–1999.

Mercury Tracer I was presented for the first time in 1987.

The first generation of Tracer hit the market in 1987. The successor of the Lynx model, while acting as the North American variety of the second generation of Ford Laser known from the markets of Asia, South Africa and Australia.

The characteristic features of the appearance of the first-generation Mercury Tracer were a rounded trunk with a large glass, as well as a low-set front belt with rectangular headlights consisting of double shades. The range of power units consisted of only one variant of Mazda construction.

Mercury Tracer II was presented for the first time in 1990.

In 1990, a completely new, second generation of Tracer debuted. This time it was primarily a twin variety of Ford Escort offered in the US, acting as its better equipped, above positioned variety.

For the first time, the body offer consisted of a three -bar sedan variant, as well as a station wagon. The characteristic elements were narrow, longitudinal headlights, as well as a wide, one -piece belt of rear lamps in a three -bristle variety. The back of the station wagon version, in turn, was captured by narrow, vertically placed lamps and a large glass.

Mercury Tracer III was presented for the first time in 1996.

The third generation of Tracer again debuted in parallel with the American Ford Escort as its twin, but better equipped and above-positioned variety. The differences turned out to be symbolic – Tracer III received only a different bumper pattern, different manufacturer’s emblems and a slightly modified interior design.

As in the case of Escort, the station wagon was only a modernized second-generation model while the sedan was a completely new structure. The production ended in 1999 without a successor. 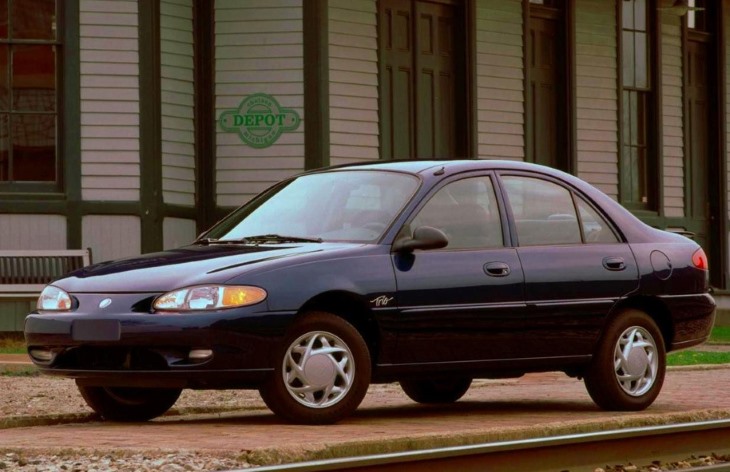