A classic does not age and remains a desirable acquisition, even if many years have passed since its inception. These things include the famous BMW 7 Series cars, which have withstood more than one brilliant generation, from 1977 to 2008. Today we will devote time to the first generations of these prestigious cars, because they remain on the move, triumphantly drive the roads and bring extremely positive emotions to their owners in the process of using reliable, time-tested technology. In addition, their repair is not a problem due to a large number of branded car services, and spare parts are not in short supply. But still, even an experienced car owner needs a repair manual, an intelligent service manual for the BMW 7 Series (E23), designed for both active drivers with experience and craftsmen. With the help of a visual and detailed manual, you can learn how to properly operate equipment in various situations, what is included in the mandatory minimum of maintenance, what are the principles of repairing all the main elements of a BMW. In this manual, we are talking about the first generations of these legendary cars with E 23 bodies, which were actively produced between 1977 and 1983. They had various types of rear-wheel-drive gasoline engines, with a capacity of 170 to 300 horsepower.

The BMW E23 is the automotive platform on which the first generation of the BMW 7 Series is based. The first model was the 730, released in October 1976. Replacing the large BMW E3 sedans, the E23 platform was produced for ten years from 1976 to 1986 and was replaced by the BMW E32 7-Series in 1987.

The following models were produced in this series:

All E23 models (except 745i) were equipped with a 12-valve 6-cylinder M30 engine, which was used in older versions of the E3 and E9. Almost all engines for the E23 were injector, two models (728 and 730) were equipped with a four-chamber Solex carburettor until 1979, after which they were replaced by the injector model 728i. Early injector models used the Bosch L-jetronic system, and later models used the more advanced Bosch Motronic digital system.

The E23  were very advanced and unusual for their time. These were the first BMWs equipped with a service interval indicator, the inscription ‘check control’ warned the driver about malfunctions of various systems. The cars were also equipped with integrated climate control. On-board computers and an anti-lock braking system (ABS) were options on earlier models, but later became standard. Various options included leather upholstery, several types of wood trim, electric seats, heated seats and power windows and electric mirrors. Late models were equipped with an airbag for the driver. 4-speed and 5-speed manual transmissions (depending on the year) and an automatic transmission were available.

In 1983 there was a small restyling of the “nose” of the car, in particular the radiator grille. The dashboard has also been improved. In 1984, an optional 4-speed automatic transmission appeared in the United States (replaced the previous 3-speed), plastic trim parts were replaced with wooden ones, electrically operated seats and an enlarged Michelin TRX tire with special TRX discs (later standard on all models 1985-1986 735i / L7) on models with a 5-speed manual transmission. 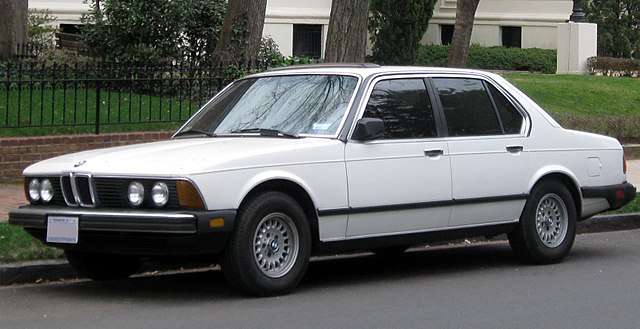