Here is a little history about BMW 7-Series E32

In 1986, BMW introduced the second generation of the 7-Series, on the E32 chassis. The car has received some of the latest developments in automotive, and a new top-of-the-line V12 engine. Options included a built-in telephone and fax, beverage cooler, double glazing, heated door locks and windshield washer nozzles, an electronic stabilization system, and a system that automatically increased the degree of pressure of the “wipers” to the windshield to hold them well even on high speed. Incidentally, the E32 was the first BMW to receive a speed limit of 250 km / h.

The cars were also available in an extended version (denoted by the letter ‘L’ after the model number), which provided 10 centimetres more legroom for the rear passengers.

The BMW 750iL Highline was the top model in the E32 line, with rear passengers upholstered in leather interior, radio control, dual climate control, electrically adjustable and heated seats, and walnut folding tables. The car had a second battery in the trunk and a second generator to power many options. The ‘Highline’ option package cost around € 10,000, and was only available for the 750iL, which with full “stuffing” cost twice as much as the base 730i.

Several different gasoline engines were available for the E32.

Externally, BMW’s “nostrils” indicated which engine was under the hood: all 6-cylinder models had narrow “nostrils”, and all 8 and 12-cylinder had an expanded size. This feature did not pass on to subsequent generations (E38 used wide “nostrils” for all models) 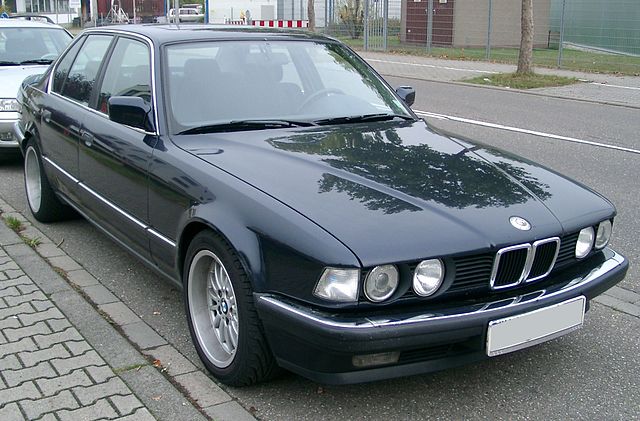