Presented in January 1971, the Nissan Violet was a smaller version of Datsun Bluebird 610, which was sold outside Japan with the Datsun brand of Nissan as Datsun 140J / 160J, except in the United States, where it was marketed simply as Datsun 710 . This model was built as a two-door sedan, a two-door coupé, a four-door fastback (and later as a normal four-door sedan), family and as a truck. The introduction of the Violet allowed NisSAN to moderately increase the existing Datsun Bluebird dimensions. The SSS sports model has independent rear suspension, others have a back crossbow suspension. Apart from the different name, the North American market 710 received large separate bumpers instead of the curved and adjusted pieces that were used in other markets to comply with US bumper legislation in 1973. The first automobiles of the export market were equipped with small plates Cover chromed to hide the holes left on top of the front fender by the backview mirrors of the Japanese market. The most powerful version offered in Japan was 1600 SSS-E with fuel injection with 110 ps (81 kW) JIS at 6200 rpm.1 in export markets, 160j SSS double carburetor claimed 95 ps (70 kW) DIN, five more than 160J Normal.2 In Japan, the 1800 cc engine arrived in October 1975 and was only available with GLP, for use in taxis.3

The Datsun 710 car was sold in the US and Canadian markets since 1973, it was the export version of the Japanese Nissan Violet model. In addition to minor parts in the design of the body, the American version of the model was distinguished from the Japanese power unit: a two-liter gasoline motor was installed on a car with a capacity of 94-97 hp. Combined with a manual transmission or a three-step automatic transmission.

Datsun 710 had versions with sedan bodies (two-door and four-door), coupe and wagon. The Datsun 720 pickup was also created on the same platform.

The production of the car continued until 1977. 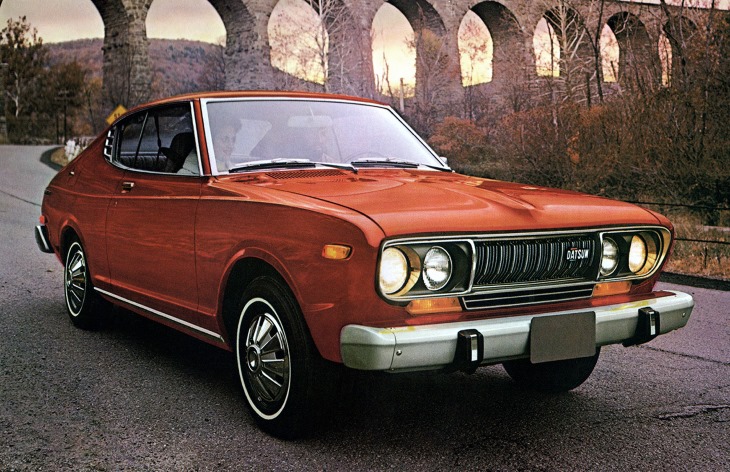