More than 7 Hyundai Atos repair manuals for free download. There are also workshop manuals (with wiring diagrams), owner’s manuals and body repair manuals on this page.

Hyundai Atos debuted in 1997 in the South Korean market, a year later it began to be sold in Europe. He was immediately assigned to the class of small cars and to the category of “female” cars. It is a five-door front-wheel wagon. It features an original design and compact dimensions. A short Atos with a length of only three and a half meters is extended upwards by 1615 mm. Separately, it is worth noting the size of the doors, which occupy most of the side panels of the body. As a result, sitting inside is extremely easy. Yes, and landing contributes to this, the seats are located higher than in full-size cars. Among the undoubted advantages – excellent visibility both forward and backwards.

The luggage compartment is 263 litres, if you fold the back seat, the usable area increases to 1084 litres. The trunk opens either from the inside with a lever at the driver’s seat or from the outside with a key. The cabin provides for the presence of small additional containers for various luggage. On the driver’s door, there is a pocket, to the left and to the right of the steering column there are small recesses where a pack of cigarettes or a wallet can fit easily. Instead of the classic glove compartment, the front passenger has an open shelf, but under the seat, there is a drawer in which you can hide audio cassettes or other trifles.

Hyundai Atos equipped with a 4-cylinder, 12-valve engine with distributed injection power of 55 hp and a volume of 1 litre.

Standard equipment includes an airbag for the driver and front belts with pre-tensioners, power windows for the front doors and a simple radio.

In the fall of 1999, the model was updated and it became known as Hyundai Prime. The body of the updated model became slightly lower (1580 mm), and its rear part is not vertical, like on Atos, but inclined. In short, after the upgrade, the body began to more and more fit the definition of a five-door hatchback. In addition, cars differ in the design of the front. Atos Prime has not an oval, but a rectangular cut-out of a radiator facing with stylized teeth, as on Accent models. The taillights were moved down from the top of the trunk lid, which only improved the appearance of the model. And above the lid, itself appeared an elegant visor-spoiler with additional brake light. Optionally, the equipment of the car can be supplemented with ABS, a climate control system and a large sunroof for almost the entire roof.

Not distinguished by “thoroughbred” surroundings, Atos is not devoid of comfort and functionality. In the cabin, thanks to the gondola layout, there is no less space than representatives of the golf class. The ergonomics of the driver’s workplace and the quality of the materials used to look quite decent. Hyundai specialists have significantly improved sound insulation, saving Atos from a whole gamut of extraneous sounds. You can choose from two levels of equipment GL and GLS.

Hyundai Atos Prime attracts not only with its low price and low-cost maintenance but also with the presence of a range of versions with an automatic and even semi-automatic gearbox. And for the laziest, a three-stage “automatic” is offered. Small dimensions are a plus in traffic jam or in the parking lot. Hyundai Atos Prime is a convenient car for the city.

In 2003, at the Frankfurt auto show, the Hyundai Atos 2004 model year was presented. The new car differs from its predecessors in the modernized design of the front of the body, where new headlights, a new grille and a new bumper have appeared. Smooth body lines gave way to sharper edges. In addition, the novelty received a slightly modernized interior, where new finishing materials appeared and will be equipped with a 59-horsepower 1.1-litre engine, which can be aggregated with either a manual or automatic transmission. The power unit is able to provide an acceptable level of dynamics, and also boasts high efficiency.

As expected, the updated Hyundai Atos will be available in two main versions – ActiveVision and DymanicVision, which differ in the level of trim and a list of basic equipment.

The production of a new generation of Hyundai Atos will be launched at the Indian Hyundai Motor facility in Madras. 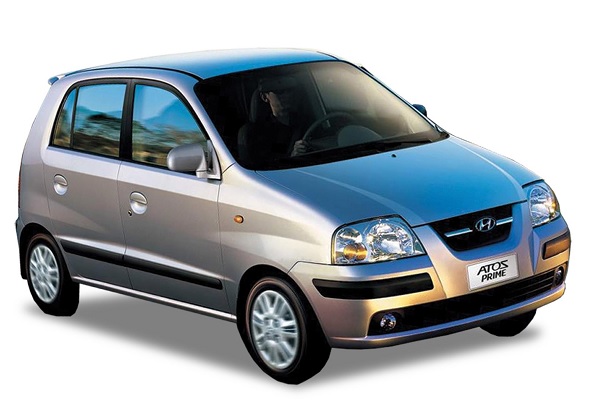