The release of the small car Citroen 2CV was planned to begin in 1939, but because of the Second World War, the model officially debuted only in 1948 at the Paris Motor Show. The car had an extremely simple design: flat body panels, a fabric roof, a 375 cc air-cooled two-cylinder engine. see and with a capacity of 9 liters. with., but at the same time had a front-wheel drive. The serial production of the car began in 1949, and it cost half the price of the Volkswagen Beetle.

Over the long years of production, the car, nicknamed “The Ugly Duckling”, has acquired many modifications. In 1951, vans and pickups with a carrying capacity of 250 kg appeared in the model range. In 1967, a luxury version of the Citroen Dyane, created on the basis of the “de-shvaux”, appeared, and in 1968 – the light SUV Mehari. In addition, in the 1960s, a twin-engine four-wheel drive Citroen 2CV Sahara, aka 2CV 4 × 4, was produced.

In France, Citroen 2CV was discontinued in 1986. The car continued to be assembled for the longest time in Portugal – until 1990. 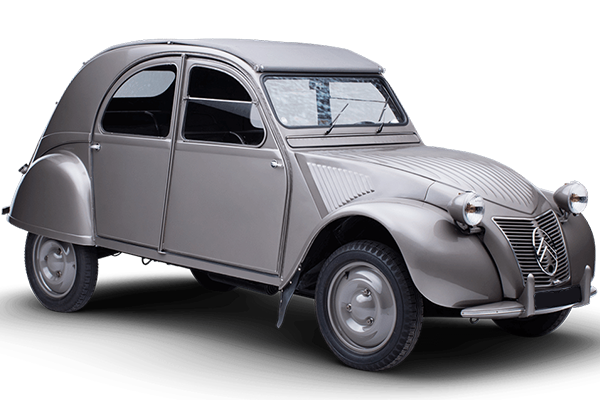