The Chery V5 (also known as Chery Eastar Cross) is a minivan produced from 2006 to 2018 by the Chinese car manufacturer Chery Automobile.

Presented in the form of a prototype at the 2014 Beijing Motor Show such as Chery B14, in which the acronym B14 indicates the internal design code, the car is the first minivan of the Chinese house which debuts in a definitive guise in June 2006 at the Hangzhou Motor Show renamed Chery V525 and It enters production in August 2006 in the Wuhu plant in China with the name of Chery V5.

The V5 is designed together with the Benteler and has a 4662 mm long bodywork, 1820 mm wide and 1590 mm high with a monocoque mixed with high resistance steel in the front area and classic steels for the rest of the structure. It is based on the same frame as the eastar sedan with front -wheel drive and with front engine while the suspensions were designed by Lotus Engineering and use a four -wheel independent four -wheel scheme with McPherson upright. At launch the only engine available was a 2.4 -cylinder petrol of Mitsubishi origin with 129 horsepower multipoint injection combined with a 5 -speed manual gearbox or a 4 -speed automatic. Shortly after the debut, the range was enriched by a new 2.0 ACTECCO engine (developed internally by Chery together with AVL) Four Cylinders 16V 138 horsepower with multipoint injection and variable favament combined with the 5 -speed or automatic 4 -speed manual gearbox. The passenger compartment was available both in five seats and seven -seats on three rows of seats.

The V5 was exported to South America and East Europe with the name of Eastar Cross while in South East Asia it was simply sold as Eastar MPV.

In 2008 in China the range was renewed and adopted also on the local market, the V5 Eastar Cross name, in addition, the old 2.4 Mitsubishi engine was replaced by a new 1.8 16v acteco four cylinders with 132 horsepower and 170 nm of maximum torque at 4300 rpm Euro 4 approved alongside a new 1.9 turbodiesel 16v ACTECCO four cylinders of 126 horsepower and 271 Nm of torque at 1500 rpm combined with a six -speed manual gearbox. 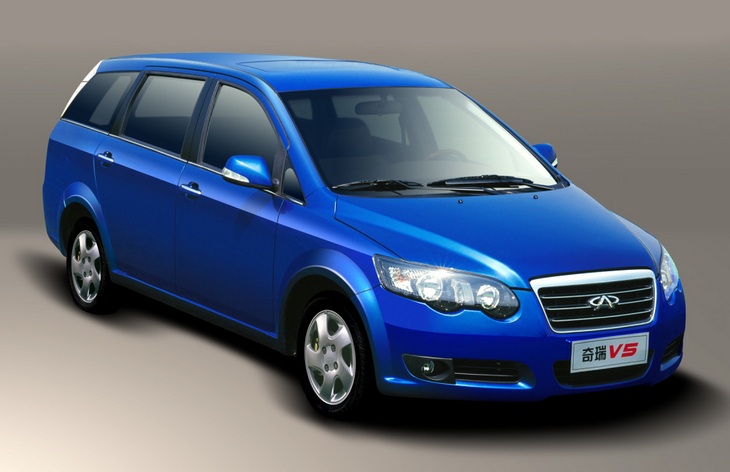