Repair and maintenance manual for BMW 5 Series F10 and F11 from 2010, with gasoline and diesel engines.

BMW is a car for people who are passionately and completely in love with movement. This model has been designed and manufactured to serve one clear and ambitious goal: to enable drivers around the world to experience a sense of harmony, comfort, power, safety, dynamism and elegance. This feeling creates an emotional connection between the driver and the car, which makes everyday driving a real pleasure.

This manual for the repair, operation and maintenance of BMW 5 Series cars allows the owner to get as close as possible to his favourite car, to understand the intricacies of the technical equipment, and in cases of unpleasant moments to find answers to your questions. In this manual, you will find all the necessary information related to BMW 5 Series cars with petrol and diesel engines produced from 2010 and 2013.

In the dedicated sections of the manual, various options for problems and how to solve them are given, the mating dimensions of the main parts and their limits of permissible wear, the recommended lubricants and working fluids. Recommendations from the manufacturer will allow car owners to independently carry out competent car maintenance. The individual chapters of the manual contain the operating instructions for the BMW 5 Series, recommendations for maintenance and the wiring diagrams (wiring diagrams) of the vehicle. Also in the manual, a lot of attention is devoted to car care, the choice of tools for repair and maintenance, as well as the selection and purchase of spare parts. The manual contains descriptions of typical malfunctions, their causes, methods of their diagnosis and elimination. Thanks to the information contained in this manual, the owner of a BMW car will be able to carry out repairs of varying degrees of complexity on his own, without contacting a service station, a service centre or a car workshop.

All this information is accompanied by photographs, by which you can easily understand the maze of technical equipment of this high-tech car.

The F10 is the sixth generation of the BMW 5 Series, which was introduced on November 23, 2009, and has been available since the beginning of 2010. The variant in a body the station wagon (Touring) has designation F11, and the liftback – F07. This generation replaced the BMW E60 / E61.

On November 23, 2009, a new generation of the BMW 5 Series was introduced. The car received new body designations – F10 for the sedan body version and F11 for the station wagon version. Compared to the previous model, the F10 has many improvements. In particular, the front suspension now uses double wishbones (a similar design is used on the BMW 7 Series), the rear suspension is multi-link. As of mid-2010, this model is offered with seven engine variants. Gasoline engines include a 4.4-litre V8 twin-turbo engine N63, and three-row six-cylinder engines – a 3.0-litre turbocharged N55 engine, and two variants of 3.0-litre N53 engines of different power. Diesel engines are offered in three varieties – two 3.0-litre in-line six-cylinder engines N57 of different power and a two-litre in-line four-cylinder engine N47. Gearboxes are available in two versions – 8-speed manual transmission or 8-speed automatic ZF 8HP. 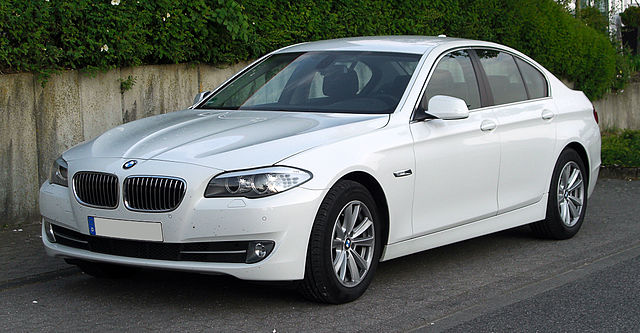