Any vehicle requires good care, regular maintenance and timely repairs if necessary. Toyota Ist / Urban Cruiser repair manual will tell the driver the best solutions, both for duty officers and for non-standard situations and issues related to the repair, operation and maintenance of cars of this brand. The manual will also be interesting and useful for workers in car repair shops who want to make their work easier and at the same time ensure an effective result.

The manuals show models released from 2003 to 2017, equipped with 1NZ-FE (1.5 l), 2NZ-FE (1.3 l) gasoline engines. Please note that this guide can also be used when repairing left-hand drive vehicles.

This manual contains only proven and most relevant information, which was prepared by leading experts in the field of auto mechanics. The authors also paid attention to safety issues, so not only an experienced driver, but also a beginner can practice with the book. In addition, this Toyota Ist / Urban Cruiser repair manual is easy to follow due to the accessible style of presentation of the new material and the convenient layout of the content.

As you know, theory and practice are interconnected. Therefore, in order for the user to be able to successfully master the applied section, it is recommended to start with a theoretical information block. It includes, for example, a visual and detailed overview of the external and internal structure of the car with a description of all units, components and systems of the machine, including their location, functionality, scope, technical data. Not only skillfully driving the car, but also guaranteed avoiding many dangerous mistakes in the driving process, the motorist will be helped by a complete instruction manual for Toyota Ist / Urban Cruiser. There is also a section in the manual that describes all the maintenance procedures for Toyota, so that preventive checks of the car, according to their regulations, can be carried out by its owner on his own.

The compact five-door Toyota Ist hatchback debuted in 2002. The car, created on the platform of the Toyota Vitz model, had a higher seating position and a “crossover” design.

The model was produced in Japan, outside the local market, the car was sold under the names Scion xA (in America) and Toyota xA (in the Middle East).

The Toyota Ist was equipped with 1.3 (87 hp) and 1.5 (105-109 hp) gasoline engines in combination with a four-speed automatic transmission. The basic version had front-wheel drive, and the 1.5-liter version was also offered with all-wheel drive.

The production of the first generation cars was completed in 2007.

The second generation of the Toyota Ist model was produced in Japan from 2007 to 2016. The car was sold locally and exported to North America as the Scion xD and to Europe or Latin America as the Toyota Urban Cruiser.

The compact five-door hatchback, which was designed in a crossover style, was based on a common platform with the Vitz model. The Toyota Ist was equipped with a 1.5-liter gasoline engine (103-109 hp) in combination with a variator – such a car was offered with both front-wheel drive and all-wheel drive. The more powerful version was equipped with a 1.8-liter engine (132 hp) in combination with a four-speed automatic transmission and a front-wheel drive transmission.

The successor to this model can be considered a compact crossover Toyota C-HR. 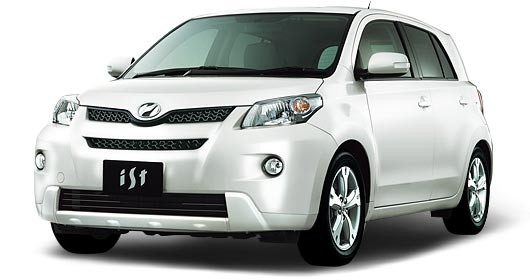