It is necessary to have an understanding of the construction, use and maintenance of the Infiniti QX56, as well as what the electronics of the Jeep are and how it is repaired. The answers to all these questions are covered in detail in the Infiniti QX56 repair manuals, designed for users with different levels of initial training. The manuals cover third-generation models produced between 2010 and 2013. These cars look even more imposing than their predecessors, and their capabilities have been brought to perfection. These jeeps have power units on gasoline with a working volume of 5.6 liters.

The Infiniti QX56 is based on the seventh generation Nissan Patrol platform and promises more safety, comfort and performance than its predecessor.

The car received a 5.6-liter V8 engine with direct fuel injection and a 7-speed automatic transmission. The power of the Infiniti QX56 engine is 406 hp. and a torque of 600 Nm. Manufacturers claim that this gearbox has increased the power of the machine by 25% and reduced fuel consumption by 7%.

Salon Infiniti QX56 can be both 7-seater and 8-seater with an average row of seats that fold in a ratio of 60/40. The front seats are heated and ventilated. And to ensure that none of the passengers on the trip gets bored, the car has proprietary hard drive navigation, a surround view monitor, a 2-channel 13-speaker Bose audio system and a DVD entertainment system with two 7-inch screens for passengers in the rear row. 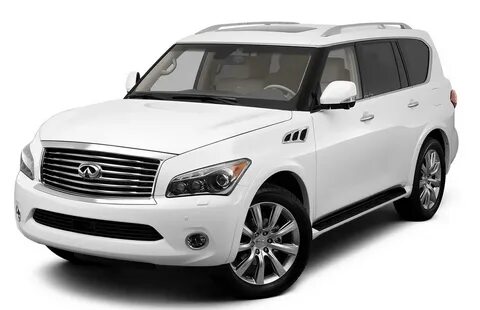