In 1985, Honda launched the Legend sedan into mass production, which became the brand’s first model in the business class. Unlike competitors (for example, Toyota Crown or Nissan Gloria), “Legend” had no rear-wheel drive but a front-wheel drive. The Japanese were engaged in the development of the car in cooperation with the British company Austin Rover Group, the result of work on the European side was the sedan Rover 800. Later, the model range was replenished with a version with a coupe body.

In Europe, Honda Legends has been sold since 1987 with only a 2.5-liter engine, these were cars assembled at a factory in the UK. In the American market, the model was known under the name Acura Legend.

The second generation of the Honda Legend was produced in Japan from 1990 to 1996. As before, these were large front-wheel-drive sedans and coupes. The only power unit – V6 3.2 developed 215 or 235 hp. from. depending on modification. “Legends” were equipped with a five-speed (later six-speed) “mechanics” or a four-speed “automatic”.

In 1994, licensed production of cars under the name Daewoo Arcadia was organized in Korea.

In 1996, another version of the model went on sale, this time the car was offered only with a sedan body. Under the hood of the car was a 3.5-liter “six” with a capacity of 215 liters. from. “Legends” for the Japanese market were equipped with only four-speed “automatic”, and cars for Europe could also be equipped with a six-speed manual transmission. Following its flagship status, the sedan had rich equipment for those years, including side airbags, a navigation system, and a keyless entry system.

In 1998, a small restyling of the model was carried out, affecting the design of the front part of the body. In this form, the Legend model was produced until 2004.

The US version has been renamed from Acura Legends to Acura RL.

In the fourth generation Honda Legends, which debuted in 2004, the Japanese relied on the car’s driving performance. The sedan received an “advanced” all-wheel drive SH-AWD transmission: the car had a planetary gearbox in the rear wheel drive, which allows you to switch to an increased “gear”, and thanks to special clutches, the torque to each of the rear wheels was transmitted independently of each other in accordance with the driving conditions … All this transmission was automatically controlled by electronics and allowed to improve the sedan’s handling.

The Honda Legend was equipped with a 3.5-liter V6 gasoline engine with a capacity of 295 liters. with., working in tandem with a five-speed “automatic”. In 2008, simultaneously with the restyling of the model, the engine was replaced with a 3.7-liter (300 hp), at the same time the settings of the suspensions, steering, gearbox were changed.

In USA, this model was known as the Acura RL.

The fifth generation of the Honda Legend business-class sedan has been produced in Japan since 2015 and is sold only on the local market. In America, a similar model is known as the Acura RLX.

The Honda Legend is equipped with a hybrid powertrain. Gasoline naturally aspirated V6 3.5 engine (314 hp) in combination with a seven-speed robotic gearbox and an electric motor developing 48 hp. with., set the front wheels in motion. Two more electric motors with a capacity of 37 liters. from. each work on the rear axle. 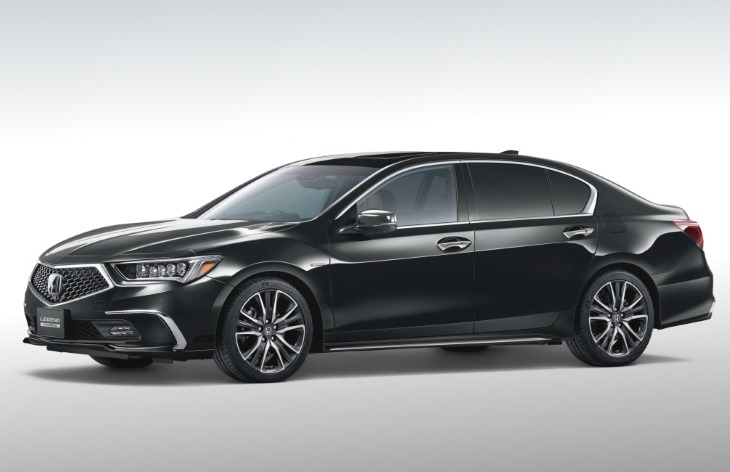