In the early 1980s, the image and line of cars of the European branch of “Ford” greatly changed. Older sedans began to be replaced mainly by new hatchbacks, from the Ford Escort to the Granada, and the Sierra, which went instead of the Cortina. Ford Orion, in turn, was designed to fill the needs of the market for 4-door sedans, which appeared as a result of the disappearance of the Ford Cortina. Orion looked like an Escort in the front, but the back of the car was completely different; the Orion had a long flat overhang of the trunk. Although the Orion’s length was similar to that of the Ford Sierra, the latter had more legroom in the back.

Initially, the Ford Company offered the Orion only at the GL and Ghia trim levels, allowing for the lowest levels, compared to the Escort. The 1300 cc and 1600cc CVH engines were available (although carburetor and injection 1.6 liters were installed on the Ghia). The lower L-model was introduced in 1984, and received a 1.6-liter diesel engine, which was put on the GL version. 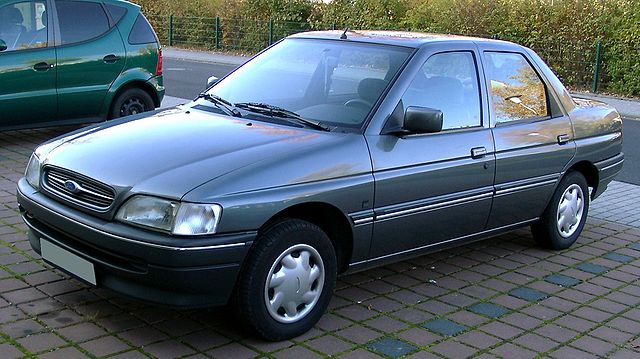 Standard features of the Ghia 1.6i version were central locking, sunroof, front sport seats, powered windows, rear head restraints, a tachometer and an information computer informing the driver when the vehicle needed maintenance. All these features were rare enough for a family car of the 1980s, as indicated by sellers with their complaints. Orion’s competitors in this class were Volkswagen Jetta, Mercedes-Benz 190, Rover 213/216, Vauxhall Belmont, Daihatsu Charmant, BMW E30 and Volvo 360.

The Orion 1.6i had the same engine as the Escort XR3i and delivered the same performance and was also manageable, as a result of which it acquired the XR badge in the late 1980s. In 1989, the 1.6i was also released in limited quantities with an improved finish, and was named 1600E. Orion 1600E was available in black, white and metallic gray, wood trim on the dashboard and doors, and gray leather seats.

Eventually, as the years passed, Ford began to bring elements close to the Escort into the modeling and development processes of the Orion.