The Dodge Viper is a Dodge sports car. Production of the two-seater began in 1992 at the New Mack Assembly. In October 1995, production was moved to the Conner Avenue Assembly, where it continued until recently. The car, as well as its many modifications, can often be seen in various TV shows, video games, movies and music videos. Production ceased on July 1, 2010.

The engine is based on the Magnum V10 engine from the Chrysler LA series. Initially, the pickup engine was very heavy for a sports car, and Lamborghini, then owned by Chrysler, replaced the cast iron V10 unit with an aluminum alloy unit. Chrysler, due to doubts about the realization of the potential of Viper and lower production costs, refused to install heads with four valves per cylinder.

Despite the similar appearance, the car from the first generation is quite different. Changes: redesigned lightweight (up to 290 kg) engine with higher power (450 hp) and a maximum torque of 664 Nm, less car weight, almost completely changed the chassis, which is 27 kg lighter and 25% stiffer, achieved by thorough computer analysis, changed suspensions, improved tires, shortened braking distance. The anti-lock brake system (ABS) in the base version was not initially installed – only as an additional option.

Two front airbags were added in 1996 on the Viper GTS modification, and in 1997 on the R / T10, according to a government decision.

In 2003, DaimlerChrysler Street Racing Technology (SRT) made major changes to the Dodge Viper. The new Dodge Viper SRT-10 has become more angular. The engine was increased displacement (up to 8.3 liters) with an increase in power to 500 hp and maximum torque up to 712 N m, engine weight was reduced to 230 kg. The chassis has also improved, it has become torsionally tighter and 36 kg lighter. An even stiffer and lighter chassis is used in the Hennessey Viper Venom 1000 Twin Turbo version. In 2004, Dodge introduced a limited edition package “Mamba edition cars” – a black interior with red trim.

The Viper SRT-10 Coupe was unveiled in 2005 at the Detroit Auto Show in Detroit. He also retained the characteristic feature of his predecessor – the roof called the “double bubble”, raised above each seat.

In 2008, the engine was refined – 600 hp. (450 kW) at 6000 rpm and 760 Nm at 5100 rpm, as well as increased valves, changed the combustion chamber, the system of changing the phases of the gas distribution. The engine was provided by McLaren and Ricardo Consulting Engineers. Electronic engine management systems were developed by Continental AG.

The fifth generation Dodge Viper debuted at the 2012 New York Auto Show and became known as the SRT Viper. At the end of 2012, sales of SRT Viper began in the United States. The vehicle was developed in Auburn Hills with the participation of Ferrari and Maserati. The car is equipped with an atmospheric gasoline engine 8.4 liters V10, 649 hp, torque 814 Nm, 6-speed. Manual transmission and rear-wheel drive. 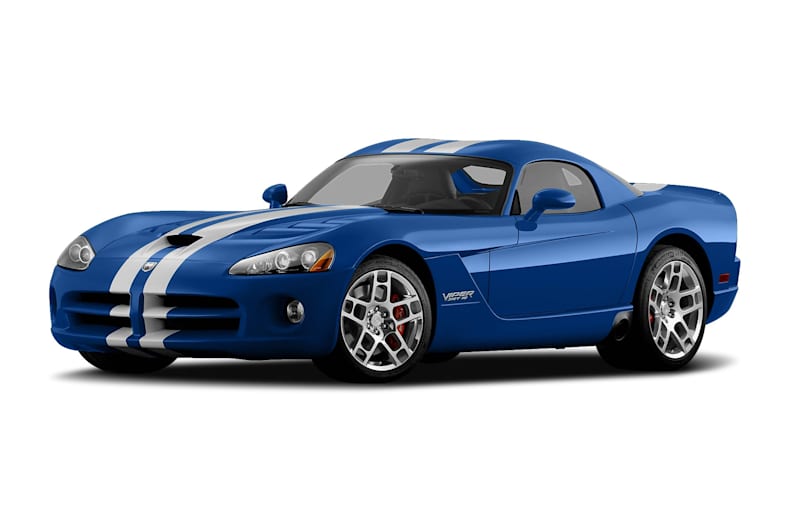