The Chrysler Cirrus mid-size sedan was produced from 1995 to 2000. Its “twins” were the first generation Dodge Stratus and Plymouth Breeze. Chrysler was positioned as the most expensive and prestigious car of the trio. Two engines were offered for Sirrus: a 2.4-liter and a 2.5-liter V6. In 2001, this model was replaced by the Chrysler Sebring.

Chrysler Cirrus cars have replaced cars built on the Chrysler K platform. Various magazines, such as Consumer Reports, have generally compared the Cirrus to mid-size cars such as the Chevrolet Malibu and found it more spacious than the Ford Contour. Externally, all three cars (Cirrus, Stratus and Breeze) look very similar, the differences are mainly headlights, bumpers and wheels. Differences in the design of the front parts of cars are due to the borrowing of the front optics and radiator grilles from the minivans of the manufacturer to which the model belonged. The interiors of the cars are also almost identical, differing in details such as the name of the model on the steering wheel. The set of options was also common: independent suspension of all wheels (with double wishbones at the front, multi-link at the rear), air conditioning, adjustable steering wheel, airbags for driver and front passenger, 4-speed automatic transmission (Autostick was not available for Breeze), ABS , cruise control, power windows, central locking, electrically adjustable mirrors, sunroof. The manual transmission was only available for models with a 2.0-liter engine, as other engines had too much torque, and it is more difficult to drive a car with a manual transmission.

The Cirrus debuted in 1995 as a replacement for the Chrysler LeBaron sedan. Initially, two configurations were available: base LX and luxury LXi. On both configurations were installed “sports” black mirrors attached to the body with two racks, fog lights, identical moldings, chrome bumper parts, automatic transmissions, radiator grilles were available in both chrome and painted in body color. For the first time, Chrysler installed its original logo on this car, which had not been used for 41 years. Production of the LX was discontinued in 1998, but resumed in 2000, replacing the Plymouth Breeze, which had been discontinued earlier that year. In 2001, the Chrysler Cirrus was replaced by the Dodge Stratus sedan. 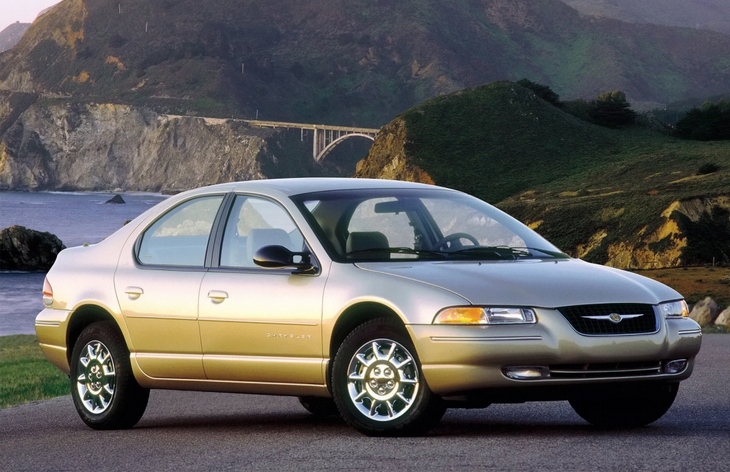