The midsize SUV makes an excellent first-sight impression. It is a strong and safe car, made to last. It’s nice to sit behind the wheel or in the cabin, because you can not only enjoy a whole range of modern technical capabilities, but also be sure that the car will not let you down under any circumstances. It is such a crossover that is the best suited for overcoming difficult roads, not to mention how silently and gently it rushes along the rolled track.

Chevrolet Trailblazer owner’s repair manuals are intended for car enthusiasts who are interested in everything related to their car, as well as for car service technicians who want to quickly and efficiently solve any work problem. These can be procedures related to diagnostics, repairs, car electrical equipment, and its maintenance. In addition, the manuals touched on the operation of the Chevrolet Trailblazer, produced since 2002 and equipped with gasoline or diesel engines: 3.6 l / 2.8D.

All information is presented not only accessible for novice users, but also professionally – accurately, clearly, with a convenient content structure. It is important that these Chevrolet Trailblazer repair manuals include graphs, comparison tables and other visual material with which it is easy to understand any automotive issues and successfully apply the knowledge gained from the book in real situations.

This guide includes a wide range of information, thanks to which the result is a thorough picture of the crossover. General characteristics of Chevrolet are indicated, as well as safety rules in case of repair, maintenance, management. An illustrated instruction manual for the Chevrolet Trailblazer is provided, and there is also a separate section on the maintenance of the SUV. Listed are examples of all regulated checks, inspections, replacements, taking into account their frequency and implementation rules.

As for the electrical equipment of this model, the principles of competent work with it are described in a separate section of the manual, where the Chevrolet Trailblazer wiring diagram is given in full. The repair of an SUV in various difficult situations can be correctly carried out thanks to the proposed manual. In the manuals, various malfunctions are clearly and in detail examined, methods for their identification and the rules for effective repair are shown.

The Chevrolet TrailBlazer is a mid-size frame SUV produced by Chevrolet’s General Motors since 2001.

The first generation Chevrolet TrailBlazer was produced from 2001 to 2008. TrailBlazer replaced the five-door Chevrolet Blazer. After the cessation of production of TrailBlazer in the United States began to produce a full-size model with a traverse body Traverse.

The first generation was based on the GMT360 cargo frame platform. It had all-wheel drive with “4 High” and “4 Low” modes and G80 rear differential lock (SS was equipped with all-wheel drive and G86 lock). The older LT, compared to the standard LS, had improved interior and sound system, alloy wheels, 4-wheel brakes and a standard towing package. In late 2005 and early 2006, TrailBlazer received an update, namely the new dashboard and interior, but only the LT version received an update, while the LS had an interior in 2001-2005. The SS version also received small changes to the front and back, as well as side skirts. In 2005, the ESP system was launched on TrailBlazer.

In 2012, the second generation Chevrolet TrailBlazer based on the Isuzu D-Max pickup was presented at the Dubai Motor Show, which has nothing in common with the first generation and is not supplied to the United States – the country that was the main market for the first generation car. In some markets it is sold under the name Holden Colorado 7 and Isuzu Mu-X. The car received 2.5-liter Duramax diesel engines, 150 hp. (110 kW) 350 Nm and Duramax 2.8 liters, 180 hp (132 kW) 470 Nm. A 3.6 V6 24V 239 hp petrol engine is available for Brazil, South Africa and Saudi Arabia. (on the Brazilian market, the 2015 version has 277 hp) (179 kW) 360 Nm.

In April 2019, the new Chevrolet TrailBlazer debuted for the Chinese market at the Shanghai Motor Show. The car received a retaining body without a frame.

TrailBlazer crossover is built on a modern modular platform GM VSS-F, along with Buick Encore GX. The VSS-F platform has a McPherson strut at the front and a semi-independent beam at the rear. With all-wheel drive, a multi-link suspension will appear at the rear. 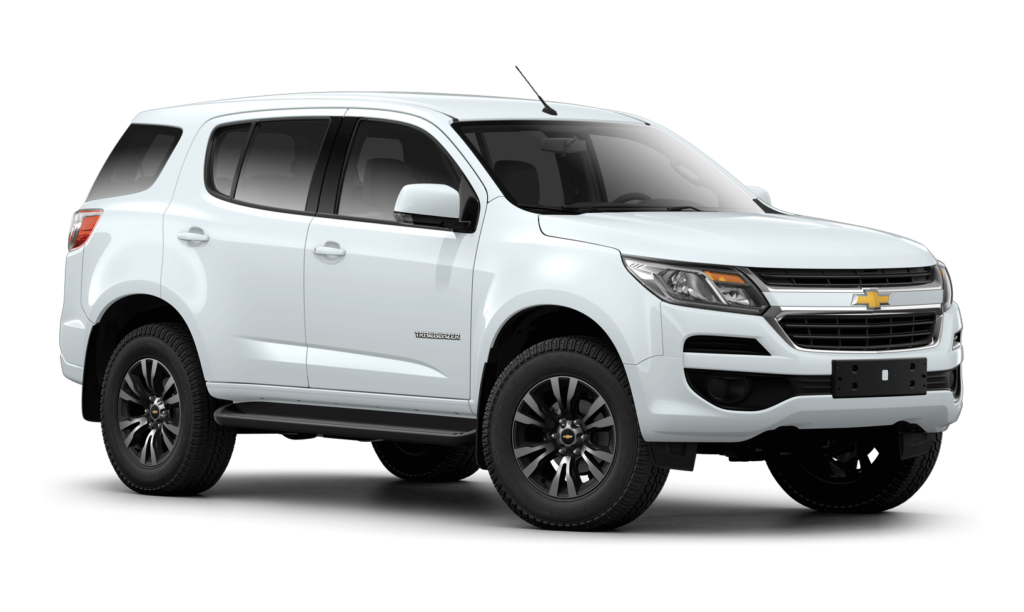