These full-size SUVs from the American company Chevrolet are famous not only in their homeland, but also among motorists in other countries. Large and comfortable, equipped with modern engines and various technical capabilities, these cars instill confidence that any intended goal will be fulfilled if it is they who go on the road. The main thing is to properly take care of your favorite car, taking into account the characteristics of a particular crossover model. Chevrolet Tahoe Repair Manual – contains data on diagnostics and repair, electronics, use and maintenance of American SUVs. These cars are equipped with 5.3 petrol power units; 6.0 or 6.2 liters. This Chevrolet Tahoe service manual will quickly go into the hands of interested car enthusiasts and service technicians, as it is one of the most competent sources of information on these topics.

The Chevrolet Tahoe repair manual is entirely focused on ordinary users, whether they are specialists or just interested car enthusiasts.

At the beginning of the manual, general information about American SUVs is given, there is information on safety measures, then the technical characteristics of the components of the Chevrolet Tahoe are given, and the design features of these SUVs. Naturally, the manual contains the entire instruction manual for the Chevrolet Tahoe. In addition, the required maintenance work is described in an expanded form, indicating the intervals between them and a list of necessary tools.

In addition, the manual found a place for information about the electrical equipment of American SUVs, including the wiring diagrams of the Chevrolet Tahoe. The most extensive chapter of the manual is the one devoted to repairing issues. It provides accurate, step-by-step and accessible instructions on how to cope with various machine malfunctions, even if the breakdown is on the way.

In 1992, General Motors introduced a new full-size SUV under two brands at once: one was called the GMC Yukon, and the version under the Chevrolet brand received the already well-known name Blazer.

However, in 1995, the model was renamed the Chevrolet Tahoe, at the same time, in addition to the three-door, a five-door version of the car appeared. The extended version of the SUV was called the Suburban.

It was a traditional SUV with a spar frame and dependent rear suspension with leaf springs. The car was equipped with a V8 5.7 gasoline engine developing 200 or 255 hp. with., as well as a Detroit Diesel V8 6.5 diesel with a capacity of 180 forces. The drive could be rear or full.

“Tahoe” was sold not only in the American market, but also officially sold in some European markets.

The second generation of the Chevrolet Tahoe SUV debuted in 2000. As before, it had a twin brother – the GMC Yukon and an extended version – the Suburban model.

The car retained the frame structure, and the continuous rear axle, but the rear suspension has now become spring, rather than leaf spring. With the change of generations, the SUV lost the three-door version, as well as modifications with a manual transmission. The Chevrolet Tahoe was equipped with 4.8-liter (275-295 hp) and 5.3-liter (280-295 hp) petrol eight-cylinder engines paired with a four-speed automatic transmission.

The Hummer H2 and Cadillac Escalade SUVs were also built on the same GMT800 platform.

At the end of 2005, the US launched the production of third-generation SUVs based on the GMT900 platform, common with the Cadillac Escalade and GMC Yukon models. The assembly of cars for the Russian market was subsequently organized in Kaliningrad, at the Avtotor enterprise.

Chevrolet Tahoe was equipped with V8 gasoline engines of 4.8 liters (295 HP) and 5.3 liters (320 HP) in combination with a four-speed “automatic”. The drive could be rear or full. A few years later, the version with a 5.3-liter engine was equipped with a new six-speed box, and the 4.8-liter version disappeared from the lineup in 2009.

The Chevrolet Tahoe is a large frame SUV, the fourth generation of which debuted in 2014. Cars are produced in the USA, but in 2015-2017, cars for the Russian market were made at the Unison plant in Belarus.

In Russia, the Chevrolet Tahoe SUV is offered with a 426 hp V8 6.2 petrol engine. with., eight-speed “automatic” and all-wheel drive system. The cabin has seven or eight seats.

On the same platform, two more SUVs are built – the Cadillac Escalade and the GMC Yukon. At home, the Chevrolet Tahoe is offered with a modern Ecotec V8 5.3 engine with direct injection and a cylinder shut-off system. 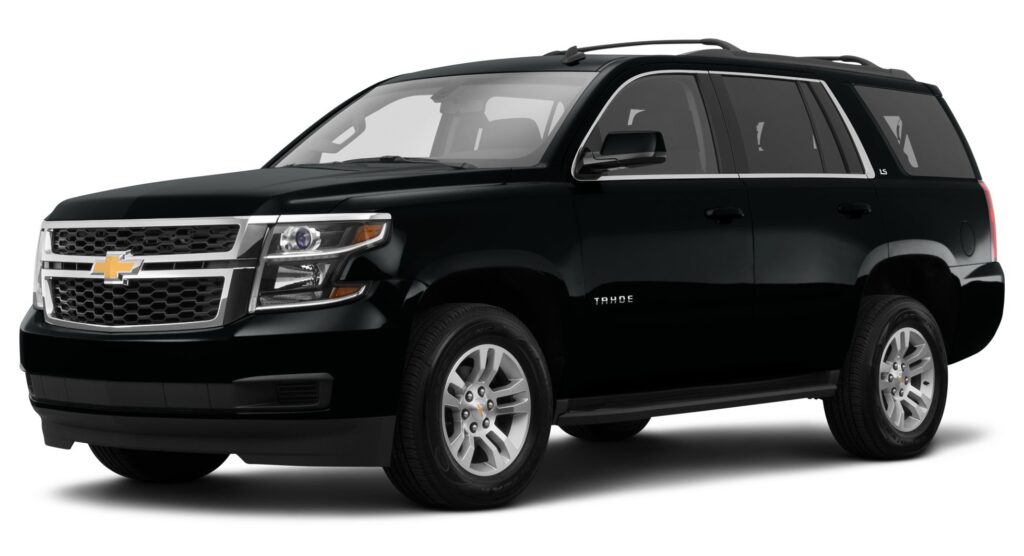