A hardy, reliable and comfortable middle-class sedan from the famous American manufacturer has been the pride of those who were lucky enough to become its owners for several years. Indeed, driving this car is a pleasure, and its modern technical characteristics will pleasantly surprise even the most sophisticated car enthusiast. But this vehicle, no less than other vehicles, requires careful attention from the driver, compliance with operating standards, regular and thoughtful maintenance and, if necessary, competent repairs done without delay. The Chevrolet Epica repair manual (since 2001 known as Daewoo Magnus) offered to your attention will give confidence to every driver who is not indifferent to the fate of his own car.

The manuals cover not only diagnostics and repair in detail, but also other daily tasks related to the operation and maintenance of the Chevrolet Epica. For masters of a car service or service station, this manual will also bring tangible benefits, since it contains the simplest and most effective solutions even for non-standard repair tasks under one cover. The maintenance manual covers Chevrolet Epica and their modifications since 2001, which are equipped with 2.0 R4 16V DOHC petrol engines; 2.0L R6 24V DOHC; 2.5L R6 24V DOHC or 2.0S R4 16V DSL diesel engines.

The presented Chevrolet Epica repair manual is no exception, since it is beautifully illustrated and designed for the widest range of users, whether it is a professional or a novice driver. Practical experience allowed us to select the most necessary, important and accurate information that will help you to thoroughly get to know your car and, from simple to complex, apply new knowledge for practical purposes. After all, many expensive procedures in a workshop can be done by the driver on his own, using only standard tools. The logical content, the alphabetical index convenient for finding the desired topic, the high information content of the book make it an indispensable assistant to the motorist on the road or in the garage.

The first topics of the manual, apart from the important section on safety while working with the machine, relate more to the theoretical area, but at the same time they are inextricably linked with the applied knowledge necessary for every craftsman or car enthusiast. So, at the beginning there is a detailed overview of the machine, which also includes visual descriptions of technical data, coordinates, functions, areas of application of all devices, units, assemblies and systems of Chevrolet. This is followed by a complete instruction manual for the Chevrolet Epica, from which any reader will take out a lot of useful information in order to avoid gross errors in the process of using vehicles.

No matter how confident the driver of the Chevrolet Epica is, not a single car is insured against unforeseen breakdowns. But the time and financial costs from an annoying breakdown can be minimized if you use this guide. In these manuals, there are clear and understandable algorithms for the diagnosis and repair of Chevrolet, which the driver, if he has at least initial work experience, will be able to perform on his own using conventional tools.

It will become much safer and easier to work with the electronics of the car if you take into account the Chevrolet Epica wiring diagrams available in the reference book. Not only diagnostics and repairs, but also assembly-disassembly, replacement, adjustment, lubrication of all components of the sedan are very clearly described in this manual. The driver or master will be able to quickly and competently solve any problem related to the operation of the engine, steering, brake system, gearbox, suspension, or body, wheels, headlights.

The Daewoo Magnus sedan was sold under the name Chevrolet Epica in some countries (Canada, China, Arab states).

In 2006, the production of a new mid-size front-wheel drive sedan began in Korea, replacing the Daewoo Magnus / Chevrolet Evanda model. In Europe and China, the car was called the Chevrolet Epica, in Korea – Daewoo Tosca, in Australia – Holden Epica, and in Iceland – Chevrolet Tosca. The model was also assembled in Kazakhstan and at the Uz-Daewoo plant in Uzbekistan, but these machines were intended only for local markets.

The Chevrolet Epica sedan was notable for its engines – in-line six-cylinder engines were installed on it, and they were located transversely! The power unit with a volume of two liters developed 143 liters. with., and a 2.5-liter – 156 forces. The “younger” engine was equipped with a five-speed manual or five-speed automatic transmission, a more powerful version – only an “automatic”.

In 2007, the model range was replenished with a version with a two-liter turbodiesel with a capacity of 148 liters. p .. The modernized Epica of the 2008 model has practically not changed externally, but instead of a five-speed one it received a six-speed “automatic”.

Production of the Chevrolet Epica continued until 2012. It was replaced by the “global” sedan Chevrolet Malibu. 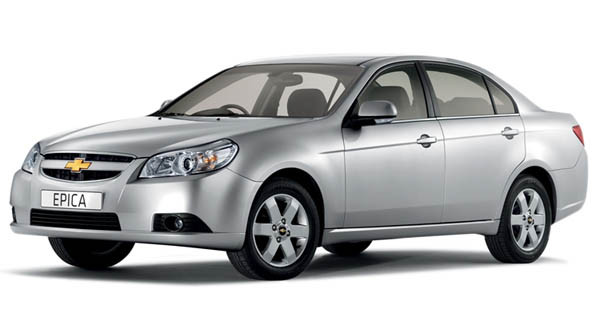