Manual on repair, maintenance and operation of Chevrolet Chevette cars, all gasoline engines.

In this Chevrolet Chevette Service and Repair Manual:

The purpose of these Chevrolet Chevette instructions is to assist the owner in using the vehicle to its full potential.

These Chevrolet Chevette Service Manuals also provide a complete list of periodic maintenance procedures. The most common malfunctions and methods of their detection and elimination are also given.

The manuals are intended for owners of Chevrolet Chevette cars, service station specialists and repair shops.

The compact sedan Chevrolet Chevette, created by the Brazilian subsidiary of General Motors, entered the assembly line in 1973. The car was produced in Brazil, and was intended for the local market and other countries in South America. Subsequently, its production was organized in Argentina, Ecuador, Colombia, Uruguay.

The Chevrolet Chevette was created on the global “Platform T” with a front-mounted powertrain and rear-wheel drive (it was also designed, for example, the Opel Kadett).

Initially, there was only a two-door sedan in the lineup, but later a four-door sedan, a three-door hatchback, a three-door station wagon and a pickup truck appeared on the conveyor.

The Chevrolet Chevette was equipped with 1.4 and 1.6 liter petrol engines in combination with a manual transmission or a three-speed automatic transmission. In Brazil, cars were traditionally sold with engines capable of running on ethyl alcohol, and in some countries there were also options with 1.8-liter Isuzu diesels. In the early nineties, the Chevette Junior entered the market with a tax-friendly one-liter engine.

In Brazil, the Chevrolet Chevette, which has gone through several upgrades, was produced until 1994, and the last cars left the plant in Colombia in 1998.

Production of the Chevrolet Chevette compact hatchback began in the United States in 1975. The car, built on the rear-wheel-drive global T Platform, was General Motors’ response to the 1973 fuel crisis and the subsequent rise in consumer interest in small, fuel-efficient Japanese cars.

At first, the Chevrolet Chevette was produced only with a three-door body, and in 1978 a five-door hatchback appeared in the range. In the Canadian market, this model was called the Pontiac Acadian.

The car was equipped with 1.4 and 1.6 liter gasoline engines (53–63 hp) in combination with a four-speed manual transmission or a three-speed automatic transmission. Later, the car received a five-speed “mechanics” and a 1.8-liter Isuzu diesel engine.

Production of the Chevrolet Chevette in the United States continued until 1986, with a total of 2.8 million made for the American market. 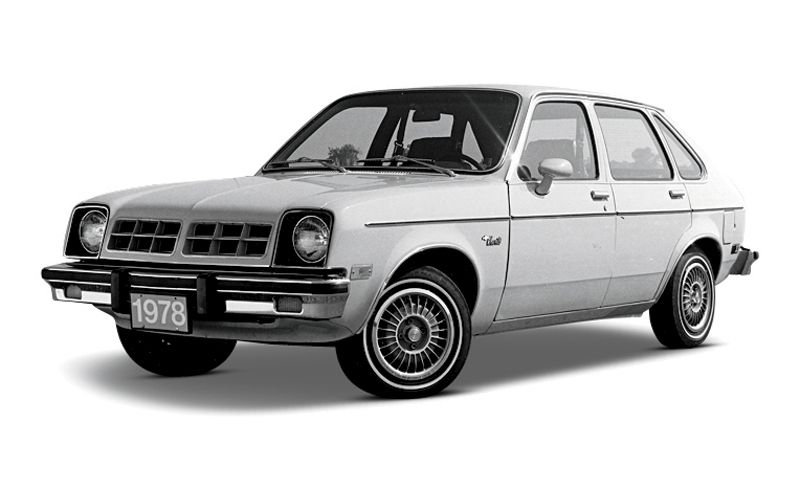