The Alfetta is a sports sedan of the upper-middle segment, produced from 1972 to 1984 by the Milanese firm Alfa Romeo.

Developed under the code name “Project No. 116”, the Alfetta was the result of the marketing disorder that reigned in 1969 within Alfa Romeo. The cultural revolution of that decade had changed the modus vivendi of Italian society, sometimes going against personal tastes. Indeed, there was doubt within the brand that the silhouettes of the 1750 and Giulia could be maintained with the geometric shapes of those years, but there was no question of dissatisfying the brand’s traditional clientele either. Initially, it was decided to update the 1750 with aesthetic touches and a new, more “European” engine, a model which debuted in 1971 using the name 2000. That same year, it was finally decided to launch the “116” project, shelved a year earlier.

The Centro Stile Alfa, directed by Giuseppe Scarnati, thus prepared an intermediate car between the “2000” and the “Giulia”, able to replace the first which had lost ground in terms of sales. The taut, angular lines and particular attention to the interior space took up the traditional layout of sports sedans, a sector in which the brand was considered at the time to be one of the most representative.

In order to emphasize the close connection between the production models and the sporting tradition of Alfa Romeo, the name Alfetta was chosen, making official the nickname used by the tifosi for the Alfa Romeo 158 and 159 Grand Prix which won the world championship in 1950 and 1951 with Nino Farina and Juan Manuel Fangio.

It is worth mentioning the unforeseen intervention of Giorgetto Giugiaro in charge in 1968 of developing the new Alfa coupé. He was finishing the plans for what was to become the Alfetta GTV.

The new model proves to be successful, both from the aesthetic point of view and from the performance point of view. But predictable controversies are unleashed between the modern “Alfists” and those more traditionalists. Without making a real decision, the brand tried to satisfy the two trends by leaving the “2000” in production until 1976 and the “Giulia” until 1978. For this reason, the Alfetta was initially hampered by the internal competition, nevertheless it had a fine career and established itself as one of the benchmarks in its category. 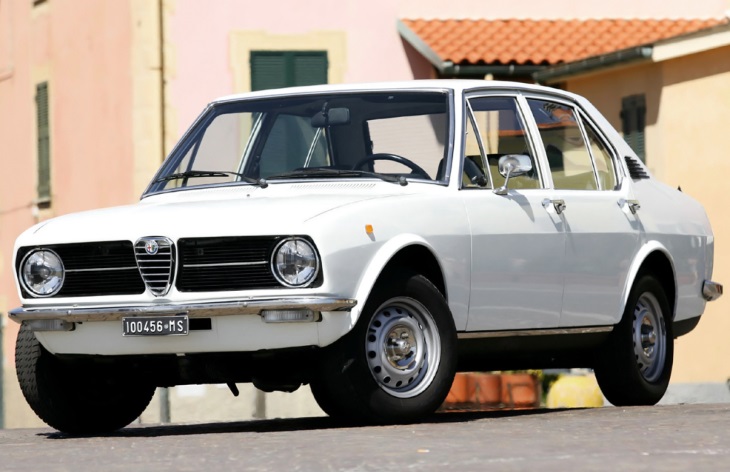